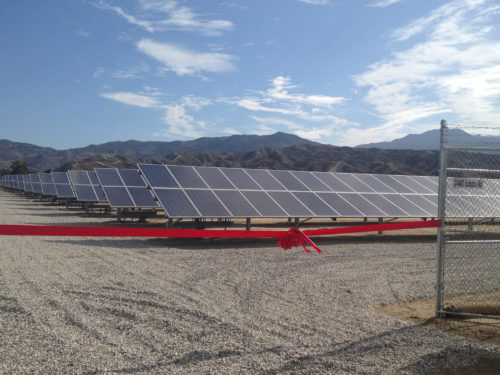 A “torrent of tweets” about solar, wind, and other clean technologies, promoting the 40th anniversary of the establishment of the U.S. National Renewable Energy Laboratory (NREL), has prompted CleanTechnica’s Tina Casey to re-evaluate the agency’s much-mocked leader, Trump appointee and former Texas governor Rick Perry.

NREL’s comms storm boasted its string of significant contributions to America’s clean energy transition, CleanTechnica reports. They include helping to more than double the efficiency of silicon photovoltaic cells “from the 9% performance used in the 1958 Vanguard I satellite,” as well as funding test facilities for solar panels and research into third-generation photovoltaic technology.

All of the anniversary messaging runs counter to Donald Trump’s aggressively pro-fossil politics. Indeed, Trump has proposed to slash funding for NREL—whose founding director, Earth Day founder Denis Hayes, was the youngest-ever head of a U.S. national lab when he took the reins of the then Solar Energy Research Institute in 1977.

That contrast prompts Casey to suggest that Perry’s bumbling public persona—he was most recently mocked for misstating the economic relationship between supply and demand—may be more deliberate than accidental, designed to protect renewable energy advances from Trumpian animosity.

“Keep in mind that the president of the United States seems happiest when he commands the media spotlight, and happier still when no one else can challenge his authority on any particular subject,” Casey writes. “The president’s fondness for humiliating others in public has also received notice from political observers.”

That suggests Perry may be trying to pacify the mercurial former reality TV star “by playing the clown, advocating for ‘clean coal,’ making room for climate ‘skeptics’, and otherwise exposing himself to ridicule, all the while making a forcible case for Congress to preserve federal dollars for renewable energy programs (and energy efficiency programs, too).”

“The advantage for Perry,” she archly adds, “is that the media narrative on his intellectual acumen was cemented long ago, so he doesn’t have to go all that far out on a limb to evoke ridicule.”

It’s worth bearing in mind that while Texas is strongly associated with oil and gas, it also boasts the United States’ largest fleet of wind turbines and a large and growing solar industry. Together, those clean energy sources are ramping up employment in Perry’s home state while jobs in fossil fuels dwindle.