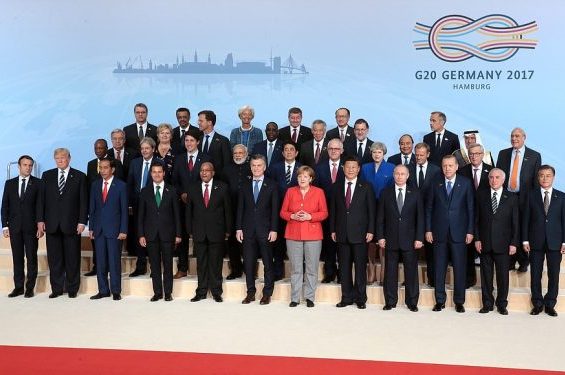 It hasn’t received much attention since the close of the leaders’ summit in Hamburg, but the 13-page Hamburg Climate and Energy Action Plan for Growth adopted by all but one of the G20 countries includes language that connects infrastructure investment to greenhouse gas reductions and climate resilience, and calls for stronger climate action from multilateral development banks.

“Significant investments will be required in the upcoming 15 years for establishing and modernizing infrastructure,” the action plan states. “This can constitute significant opportunities for stimulating employment, poverty eradication, and growth through the transformation towards sustainable, low-greenhouse gas emission, and climate resilient infrastructure.”

Recalling the broader goal of aligning international financial flows with the goals of the Paris agreement, the leaders’ action plan notes that “mobilizing climate finance from private sources will be key to addressing significant investment needs for both adaptation and mitigation,” and “public finance will continue to play a significant role.”

The G19 agree to create an “enabling environment” for public and private investment consistent with the Paris deal, recommit to mobilizing US$100 billion per year for global climate finance between 2020 and 2025, and recognize that carefully-designed domestic climate policies that preserve environmental integrity “can promote innovation and stimulate investments.”

The plan acknowledges efforts so far by the World Bank and other multilateral development banks to support a low-carbon transition and climate-resilient development, while issuing a gentle call for MDBs to deliver “an effective response to client countries’ demands, including by cooperating with national and regional institutions and fostering the mainstreaming of climate dimensions into development.”

Oil Change International Senior Campaigner Alex Doukas pointed to the gaps in the action plan. “G20 leaders put Donald Trump in the corner for a time out over his absurd climate change denial. They deserve credit for standing united behind the Paris agreement,” he said. “Yet talk is cheap, and unfortunately the G19 failed to take action to demonstrate that they’re serious about climate action by actually ending handouts to the fossil fuel industry.” Doukas added that “all fossil fuel subsidies must end by 2020—a crucial step that civil society groups, major investors, and big insurers are all pushing for.”

During the summit, the African Development Bank identified Canada, Germany, the United Kingdom, and Spain as countries that had agreed to increase their contributions to a special infrastructure preparedness fund for the continent. The donor countries “observed that Africa’s regional integration efforts were being undermined by inadequate infrastructure and that this, in turn, was due to the lack of bankable infrastructure projects in energy, transport, ICT, and water and sanitation which could attract financing for implementation,” the ADB reported.