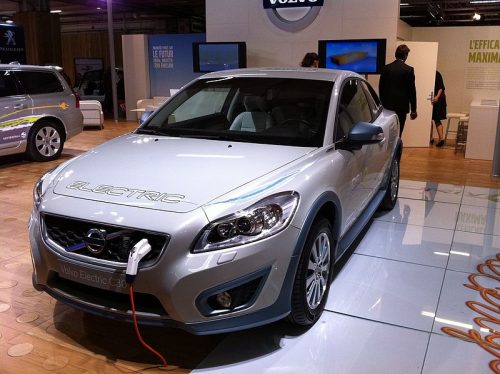 Volvo announced this week that its new vehicle fleet will consist entirely of electric or hybrid cars from 2019 on.

“This announcement marks the end of the solely combustion engine-powered car,” declared CEO Håkan Samuelsson. “Volvo’s brand will be strengthened by electrification.”

“News of the death of the internal combustion engine may not be very exaggerated after all,” Bloomberg News commented.

“This is about the customer,” Samuelsson said. “People increasingly demand electrified cars and we want to respond to our customers’ current and future needs.” He added that Volvo was also preparing its fleet to meet binding European Union carbon targets for new vehicles that take effect in 2020.

“Between 2019 and 2021, the firm will introduce five 100% electric models, and ensure the rest of its conventional petrol and diesel range has a hybrid engine of some form,” The Guardian reports. Volvo “is the first major manufacturer to make such a bold move,” even though the company has yet to produce a fully-electric car, and has not yet chosen a battery supplier.

The basic plug-in hybrid version of Volvo’s XC90 SUV crossover will carry a suggested retail price of £61,650, The Guardian notes, £13,250 more than the basic diesel.

The Volvo announcement “is indicative of the speeding up of the shift over to electrics, particularly in the wake of the VW dieselgate scandal, and it’s a sign that the industry is really starting to move and it will become mainstream,” said automotive specialist David Bailey of Aston University. “By the mid-2020s, I expect there to be a tipping point where the electric car starts to out-compete the internal combustion engine. It’s the way it’s going.”

Goldman Sachs appears to agree, telling Bloomberg that about one-quarter of global auto sales will be hybrid or all-electric by 2025. In a separate report, Bloomberg New Energy Finance predicts that more than half of all sales will be electric by 2040. Bloomberg News states that Tesla Motors’ plan to produce 500,000 vehicles per year by 2018 and a million by 2020 “is scaring traditional automakers into action,” with BMW, Volkswagen, GM, and Daimler all rolling out new models and Daimler budgeting €10 billion for development over the next five years.

“Automakers understand that they must cut prices and improve driving range for consumers to really embrace the technology, and they’re starting to deliver,” Bloomberg states. “The shift to greener cars will squeeze profits across the industry for years to comeas manufacturers develop both electric and traditional combustion engines before battery-powered vehicles become economically viable.” Citing a senior VW official, the news agency says the turning point to profitability will likely hit around 2020.