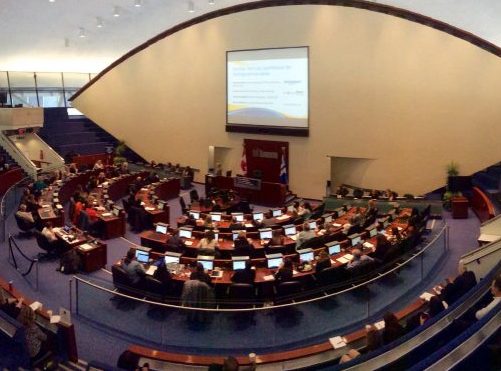 Toronto City Council adopted the TransformTO low-carbon blueprint in a unanimous vote Tuesday afternoon, but also resolved to prioritize the recommendations behind the plan to pick the elements that deliver the greatest carbon reductions at the lowest cost.

In the run-up to the vote, supporters of the full, integrated package argued that the prioritizing had already been done, and that the city risked missing its 80% carbon reduction target by 2050 if any parts of the plan were sacrificed.

“It’s like saying, ‘Which of the legs in a three-legged stool are we going to get rid of?’” Toronto Environmental Alliance (TEA) Executive Director Franz Hartmann said at the time. “What council is looking at is [already] the result of a priority-setting exercise.”

After the vote, Mayor John Tory issued a statement calling for “ambitious goals to reduce the negative impacts of climate change and increase Toronto’s resilience,” but stressed the need for federal, provincial, and private sector support to implement the plan.

Still, the groups that helped build and fight for TransformTO were prepared to declare victory.

“By unanimously passing TransformTO, Toronto City Council is showing it’s serious about fighting climate change and ensuring the actions that we take will help us to make progress on other city priorities,” the TEA stated. “The TransformTO 2050 plan will offer much needed benefits to all Torontonians including job creation, poverty reduction, and improvements to social housing and public health.”

“We applaud today’s decision by Mayor Tory and city council to unanimously approve TransformTO and renew Toronto’s climate leadership role,” agreed Mary Pickering, vice president for programs and partnerships at The Atmospheric Fund. “Implementing TransformTO will not only cut carbon emissions by 80% by 2050 but also boost public health, local jobs, and social equity in our city.”

ClimateFast applauded the “big news” from City Hall, but warned supporters that the job was not yet completely done. While the motion by Councillor Mary-Margaret McMahon to prioritize the plan may have paved the way for unanimous support of TransformTO itself, “it opens the door to debates about which parts of the plan will be funded,” the organization noted. “So we will celebrate—and then we will continue working to make sure all parts of the plan are funded and implemented.”