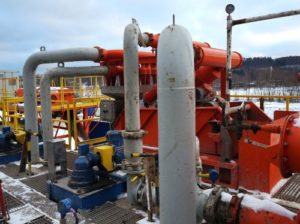 The risk of flooding the global oil market and driving down prices means that U.S. shale companies are “drilling themselves into a deep hole,” Reuters market analyst John Kemp argues in a recent post.

“Drilling and production are rising,” he writes. “Prices are declining. Companies are barely breaking even or losing money. Costs are starting to rise. And share prices are sliding.”

But shale producers still seem to be ignoring warnings from industry icon Harold Hamm, CEO of Continental Resources, who recently argued that the industry needs prices above US$50 per barrel to be (in his term) sustainable—and that prices below $40 will force drilling rigs to shut down.

“While this period of adjustment is going on, drillers don’t want to drill themselves into oblivion,” he told CNBC. “Back up, and be prudent and use some discipline.”

Continental does much of its own drilling in Oklahoma and the North Dakota Bakken formation, where costs are higher and yields are lower, Kemp notes. But even in Texas’ Permian basin, where the rig count has nearly tripled since April 2016, “shale firms have struggled to make money with oil prices stuck below $50,” he writes, “raising questions about the sustainability of the drilling boom.”

In a separate report last week, Bloomberg notes that all the fossil industry’s highly-touted cost-cutting over the last three years has been “swept away” by the latest drop in oil prices.

“For the moment, investors seem to be largely ignoring the operational improvements and focusing instead on prices,” Bloomberg notes. “The share prices of just 17 of the 90 companies in the MSCI World Energy Sector Index have gained this quarter, compared with 27 in the preceding period. This has made energy the worst performer on the MSCI World Index this year.”