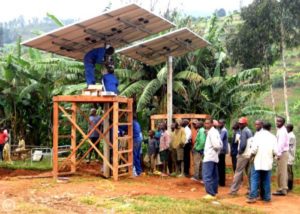 Developing countries, tired of waiting for help from rich countries to arrive and already facing mounting climate crises, are starting their own funds to deal with an uncertain future.

Despite agreeing to shift $100bn each year in climate finance by 2020 under the Paris climate deal, wealthy countries have quibbled and delayed. As of June, 43 developed countries and nine of their developing counterparts had pledged just $10.13 billion to the Green Climate Fund (GCF).

Under the direction of president Donald Trump, the US is set to renege on the majority of its $3bn pledge and looks certain to send no more money to help with climate change until there is a change in the Oval Office.

In the face of a likely shortfall by 2020, poor countries must simultaneously lobby for the rich to meet their obligations and begin to develop their own plans to cope with climate change, said Julius Mbatia, who is representing African civil society organisations at the GCF’s board meeting in Songdo, South Korea this week.

Drought-hit Kenya is one of the countries taking the lead. The Kenya Climate Change Act 11 of 2016 establishes a national climate change fund, which draws its funding from the national coffers. The fund will provide loans and grants aimed at fostering low-carbon development and protecting the vulnerable against the increasingly variable climate. The size of the fund is still being decided.

Ethiopia and Rwanda are other African countries that have set up such funds. Rwanda’s National Climate and Environment Fund is expected to provide up to $20-30m each year.

Bangladesh was the first among developing countries to set up a climate change resilience fund, which has already spent $400m from the national budget on climate change initiatives.

“Country finance mobilisation will obviously make a difference. But this does not replace the reality and principle of the convention, upheld in the Paris Agreement, that developed countries should provide financial support to developing countries to meet the huge cost of adaptation actions,” said Mbatia.

Thembinkosi Dlamini, Oxfam South Africa economic justice lead, urged governments from developing countries to reorient the whole of their budgets to prioritise the transition to low carbon development and adaptation.

“[External funding] is taking forever to materialise and even when it does, nothing will change if recipient countries policies are not re-created to be climate smart,” he said.

Dlamini said by reviewing energy policy in light of climate change concerns, a developing country’s energy mix could be realigned toward renewables. This means new foreign investments will favour that direction.

Donor countries are known to prescribe policy for funds recipients and direct them at certain technology that favours the donor countries in order to drive sales of their products, he said.

“Developing country governments should retain their autonomy during the process of transitioning to low carbon economy,” said Dlamini.

He makes this point at a time when NGOs have petitioned the GCF board for playing semantics when deciding on which projects to fund. This follows the board’s decision not to fund two proposed adaption projects from Bangladesh and Ethiopia arguing that they were developmental, rather than climate-related. NGOs argue that there is no difference and economic development equates to a more climate-resilient community.

While all countries would have to commit resources to the fight against global warming, developed countries are mostly responsible for the greenhouse gases driving climate change, said Climate Action Network policy coordinator on financial flows Anoop Poonia. He added that they also have the expertise and wealth available to support their developing counterparts,

But donor countries have made their support conditional, he said, preferring to encourage investment from the private sector, rather than stumping up their own cash. In reality, many climate-vulnerable countries still lack capacity to attract or absorb private finance and rely heavily on aid to meet their basic needs.

Poonia said the rich world needed to provide at least $35bn each year, as grants, by 2020.