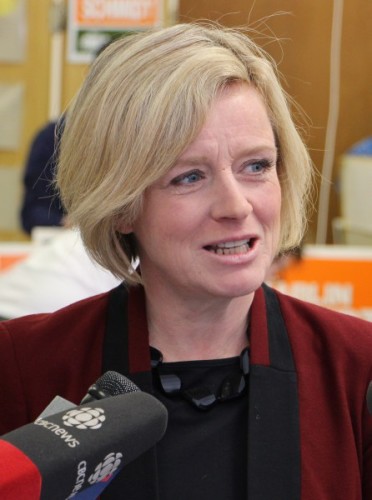 Alberta’s two right-of-centre opposition parties, the Wildrose and Progressive Conservatives, may be fueling merger talks on their shared dislike of NDP Premier Rachel Notley’s carbon tax and other climate programs, but those policies will be hard to undo if the current outsiders form a future government, CBC News reports.

The province’s $20-per-tonne carbon tax has become a lightning rod for opponents of climate action in Alberta, adding a nickel to the price of a litre of gasoline with rebate cheques paid to low-income households. The tax is set to rise to $30 per tonne at the beginning of next year.

So “the real choice in the province is between designing and implementing a carbon pricing policy that is designed with Alberta in mind and would address Alberta’s competitiveness, or having the federal government impose something on you,” commented the Pembina Institute’s Sara Hastings-Simon.

Another key plank in the Alberta climate platform is a cap on emissions from the province’s tar sand/oil sand bitumen producers of 100 megatonnes of carbon dioxide-equivalent a year. The industry is not expected to hit that cap for a decade, but opponents already blame it for chilling its potential future growth—despite other analyses pointing to multiple other reasons for the industry’s poor outlook.

“Of all the carbon policies of the NDP, this seems the easiest to wipe out,” CBC suggests.

“It’s just a policy that exists on paper, and to the extent that it even exists on paper is very, very vague,” said Trevor Tombe, assistant professor of economics at the University of Calgary. “It would be extremely easy to get rid of with the stroke of a pen, and it would have almost no consequence whatsoever.”

But doing that wouldn’t help the industry’s already soiled global reputation, counters Hastings-Simon. “It doesn’t help industry to be seen as a laggard on the environment, and what helps industry is to have certainty about planning for the future,” she said.

Most of Alberta’s actual emission reductions will be achieved with a commitment to phase out coal-fired electricity by 2030. While a new government could abandon that target as policy, the province has already signed unbreakable contracts to pay three companies $1.36 billion to close their remaining coal plants. And there, too, federal regulations also require coal to be phased out by 2030, CBC notes.

A future Wildrose/Conservative Alberta government could also renounce the current goal to source 30% of Alberta’s electricity from renewables by 2030. But it would find it hard to tear up long-term supply contracts currently being signed for solar and wind generation.

Then there are market forces. Two Alberta coal power producers opted to switch early to natural gas because of price, CBC notes.

“So even if you as a government didn’t want to require a coal phase-out, and if the federal government stopped its requirement,’ Tombe commented, “I think the economics in that business will make that transition anyway.”

Subsidies offered to individuals for a wide range of energy efficiency retrofits are the kind of program whose appeal “crosses party lines,” Tombe added. Before Notley, he adds, “Alberta was unique among provinces [and among all North American jurisdictions—Ed.] in not having an energy efficiency program, so I’m not sure that will have the same right/left split that the carbon tax has generated.”