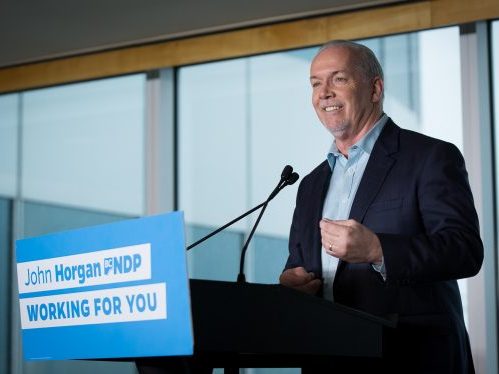 From remaking the province’s relationship with its First Peoples, to reversing course on or at least rethinking two major energy megaprojects, British Columbia’s first new government in 16 years has a long to-do list, DeSmog.ca reports.

Late last week, B.C. Lieutenant Governor Judith Guichon called on the New Democratic Party and its leader, John Horgan, to form a government with the support of three Green Party MLAs, after Premier Christy Clark’s Liberals lost a confidence vote in the Legislature. Horgan and an NDP cabinet are expected to be sworn in in the next few days. The Green Party will not join the government, but has committed to support the NDP as it pursues a number of shared policy goals.

For the purpose of tracking how well the not-a-coalition delivers on its promises to British Columbians, DeSmog.ca prepared a list of issues to watch for early action from Victoria.

The enormously controversial, as well as enormously expensive, $9-billion Site C hydroelectric project—the third major barrier on the province’s section of the Peace River—will be sent to the BC. Utilities Commission for the review it did not receive under Clark’s Liberals. If completed, DeSmog notes, “the most expensive public infrastructure project in B.C.’s history [would] flood 107 kilometres of Peace River valley, displacing residents and flooding valuable agricultural land and sacred Indigenous sites.”

A critical question will be whether the new government orders work now under way at the site suspended, pending the Utilities Commission’s review of the project’s cost and future demand for the power it generates.

Beyond the province, and in its densely-populated Lower Mainland, it’s the future of Texas-based Kinder Morgan’s plan to triple the capacity of its Trans Mountain bitumen pipeline that will be most closely watched.

In announcing their political pact, Horgan and Green Party leader Andrew Weaver promised to “immediately employ every tool available” to stop the $7.4-billion pipeline expansion. But “the pipeline is supported by Prime Minister Justin Trudeau and Alberta Premier Rachel Notley, so how Horgan and Weaver deal with the project will likely involve some sort of messy political showdown,” DeSmog predicts. That could be all the more challenging for a government that, even with Green support, will hold a razor-thin voting majority of one.

In this case, though, Horgan and Weaver could opt for a less-is-more approach to using “every tool.” The B.C. government approved the pipeline under Clark; rescinding that approval now would invite a NAFTA compensation claim from the line’s U.S. investor. As DeSmog observes, however, “the pipeline is currently being fought by local First Nations who say the project’s review process failed to meet legal guidelines for consultation.” Environmental organizations have also challenged the legitimacy of the pipeline approval. Those efforts may do a lot of the new government’s pipeline resistance work for it.

Both projects have suffered from a collapse of public confidence in the institutions—provincial and federal—designed to assess the environmental impacts of proposed resource developments. Last week, Environment and Climate Minister Catherine McKenna introduced sweeping changes to the federal assessment regime. British Columbia’s incoming provincial government has promised to review and bolster its own review process, as well.

The new government also plans “to increase the B.C. carbon tax by $5 per year starting in April, 2018, in an effort to bring the price up to the federally-mandated price of $50 per tonne by 2022,” DeSmog notes. The tax “will be rejigged” to better capture “fugitive emissions, greenhouse gases that leak or are vented from the province’s massive gas projects, and transmission lines.”

Along with remaking policy on major energy and resource development, the New Democrats and their Green allies have both committed to adopt the UN Declaration on the Rights of Indigenous Peoples. In the context of B.C., where many “First Nations [are] fighting off multiple mining, oil and gas, and hydro projects in their traditional and treaty territories,” DeSmog writes, “this could mean big changes for the way projects are evaluated and given the go-ahead, if the NDP and Greens take Indigenous rights truly to heart.”

For that to happen, however, British Columbia’s new government will need better luck, more adept leadership, or perhaps stronger principles, than either Clark’s B.C. Liberals or federal Prime Minister Justin Trudeau—both of whom also came to power promising to transform relations with Indigenous peoples in Canada.