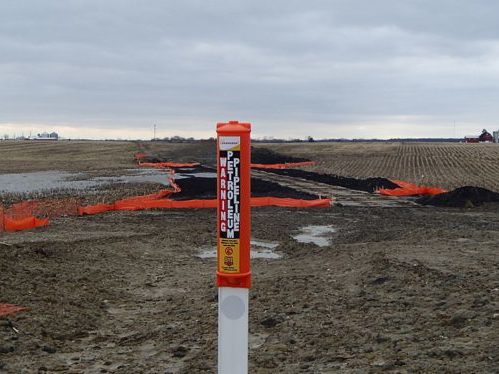 The straits join the waters of Lakes Michigan and Huron, and separate Michigan’s Upper Peninsula from its southern portion. The state’s Republican attorney general, Bill Schuette, called for a clear shutdown timeline for the 7.4-kilometre portion of the 1,000-kilometre conduit between Superior, Wisconsin and Sarnia, Ontario that runs beneath them.

The pipeline—actually two, 20-inch diameter pipes lying exposed on the lake bed about 1,000 feet apart—has shed parts of its outer coating and experienced more than two dozen leaks in the years since it was installed in 1953. According to the U.S. National Wildlife Federation, it has spilled a million gallons of petroleum products into the lakes over that time. And a study by University of Michigan researcher David Schwab estimated a significant failure of either line could contaminate 700 miles of Canadian and American Great Lakes coastline.

Environmentalists have sought for years to have the elderly pipe retired. Even though Schuette didn’t himself suggest a sunset date for the pipeline, U.S. Wildlife Federation Great Lakes Director Mike Shriberg called it ” great that he’s reasserting his commitment to shut down Line 5. The question now is, is there enough evidence for him to take action right away?”

The state released a study suggesting several alternative to the existing crossing. Fossil product unit trains or a new pipeline that avoided the straits would add many miles to Enbridge’s route. Another suggestion—a tunnelled channel beneath the lake bed—is certain to come with a very high cost. The study, overseen by state officials but paid for by Enbridge, also suggested the existing line could be allowed to remain in operation indefinitely.

“The Attorney General strongly disagrees” with that last option, a statement from Schuette’s office responded. “A specific and definite timetable to close (the pipelines) under the Straits should be established.”

Enbridge officials defended their pipeline, claiming to reporters in a conference call that Line 5 was “fit for service” and in “outstanding condition” thanks to “rigorous maintenance,” the Detroit Daily News reports.

The company has credibility challenges in Michigan, however, after allowing a leak in another pipeline to flow for days. The worst terrestrial spill of oil on U.S. soil severely contaminated the Kalamazoo River in 2010.