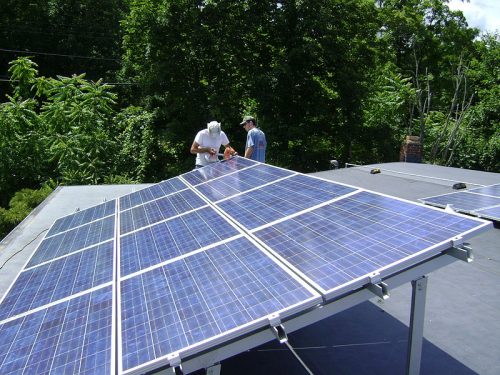 A looming trade dispute brought to the Trump administration by a bankrupt solar panel manufacturer could add a US$0.40-per-watt tariff to the cost of competing systems and take out two-thirds of the industry’s forecast installations over the next five years, GTM Research warned in a report last week.

“The case, filed by bankrupt panel manufacturer Suniva Inc., would cause equipment prices to spike in the U.S. and prompt installations to fall to as low as 25 gigawatts from 2018 to 2022, down from GTM’s current forecast of 72.5 GW,” Bloomberg reports.

Suniva immediately demanded that GTM withdraw the report, claiming its underlying assumptions were inaccurate and the resulting headlines could harm its case. GTM Research Director and co-author MJ Shiao said the organization stands by the report.

“Suniva, based in Georgia, brought the case to the U.S. International Trade Commission in April after filing for Chapter 11, saying tariffs are necessary for domestic manufacturers to compete with a surge of cheap panels from Southeast Asia,” Bloomberg recalls. “It’s asking for duties of 40¢ a watt for solar cells, which now sell for 25¢ to 33¢ a watt. Much of the solar industry has objected, saying cheap panels have been the key to growth in the U.S.”

The GTM study found that utility-scale solar projects, which compete against natural gas on price, would be hit harder by Suniva’s trade action than rooftop installations.

While the International Trade Commission’s recommendation to the White House isn’t expected until September, the rest of the industry is wasting no time making its case on Capitol Hill.

“It’s a job killer,” said John Berger, CEO of Sunnova, a solar firm that employs 260 people and has raised more than $2 billion for residential projects. He told Renewable Energy World his company has 50,000 customers and has been profitable for five straight quarters.

“We’re from Texas,” Berger said. “We have conservative views and are focused on capitalism,” and “we see consumer choice spreading because of solar and batteries.”

As for the ITC report, he added, “Trump has made it clear that he supports the creation of more American jobs, so we are confident that he will carefully weigh his options and choose to protect American jobs by not imposing tariffs.”