Controversial Navajo Coal Plant to Close in 2019, Putting Peabody Mine at Risk 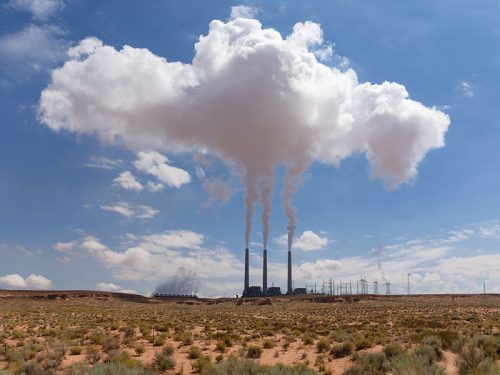 The long-running saga of the 2.25-gigawatt Navajo Generating Station in Arizona looks to be ending badly for Peabody Energy, the coal miner supplying fuel to the facility, as even a final, two-year extension of the plant’s operating lease offers scant hope of long-term demand for a failing energy source.

Meanwhile, the decision by the Navajo Nation Council to grant the two-year extension to the largest coal plant in the western U.S. is taking fire from within the community, with grassroot groups criticizing the move “as a green light for the owners of the power plant to exploit and plunder the tribe’s natural resources,” the Gallup Independent reports, in a post republished by the Institute for Energy Economics and Financial Affairs (IEEFA).

In a report issued after the Navajo Nation and the four utilities that own the plant agreed last week to shut it down in 2019, IEEFA sees little prospect that Peabody’s Kayenta mine in northeastern Arizona will find new markets once it loses the Navajo as its sole customer.

“Could Peabody or the Navajo Nation find a new owner for the plant, and therefore keep the mine open as its supplier?” asked IEEFA Finance Director Tom Sanzillo. “Could Peabody sell the mine to someone else, who would then look for new customers for the coal?”

Not likely, the report concludes. Demand for coal-fired capacity in the U.S. southwest is down, with another 2.5 GW across the region already shutting down. Coal production in Arizona, Colorado, New Mexico, and Utah fell 32% between 2014 and 2016, from 66 to 44 million tons. “Regional coal prices are flat or in decline, meaning that any new owner would have trouble making a profit,” IEEFA states, in its summary of the report. And “a new mine owner would face steep obstacles to entering coal export markets. Kayenta mine coal would be competing for market share with companies that already have global trade networks.”

The Institute notes that Peabody is lobbying the Trump administration for “unprecedented” subsidies, likely worth US$1.4 to $2.4 billion, to keep the plant open through 2030, despite “Peabody’s track record of saddling communities with high costs in order to increase its own bottom line.” For starters, while the utilities will offer jobs to everyone who works at the generating station when it closes, “Peabody Energy has made no such public offer of employment opportunities” to Kayenta mine workers.

“A more prudent—and considerably less expensive—use of federal funds would be to support a forward-looking economic transition plan that would help the Navajo Nation and the State of Arizona turn the page on this coal plant and the Kayenta mine,” Sanzillo writes.

After the Navajo Nation Council vote, Interior Secretary Ryan Zinke applauded the decision. But two grassroot organizations in the community, DinÃ CARE and Tó Nizhó í Á  í, noted that the 18-4 vote relinquished any right to settle legal differences during the shutdown in Navajo courts, and gave up control over site decommissioning and cleanup.

“There’s no other way to put it; with this agreement, the Navajo Nation had their hands tied behind their back,” said DinÃ CARE member Adella Begaye. “We are being saddled with hundreds of millions of dollars of liability.”

She charged that “the deal was rammed through by holding the Navajo Tribal Council hostage through an 11th-hour ultimatum from the very same people that were given permission to exploit and plunder our natural resources.”

“The rest of the world is moving emphatically toward a clean energy economy,” added Nadine Narindrankura of Tó Nizhó  í Á  í. “The utilities are running away from [the Navajo plant] and coal as fast as they can because coal can no longer compete economically against cleaner sources of energy.”

The two groups “contend that underneath the utilities’ promise of keeping coal on life support, there was an underhanded scheme to help the plant owners walk away from their financial and ethical responsibilities,” the Independent notes, “even though for decades they have enriched themselves by exploiting Navajo natural resources, polluting tribal land, and poisoning the air Navajo families breathe.”

“With the 2018 elections coming up, we need to elect leaders who know what climate change means and the importance of developing sustainable businesses and infrastructure,” said Tó Nizhó í Á  í member Jessica Keetso. “The Navajo Nation needs to put solar and wind energy on or near the NGS site, so that we can utilize the transmission lines and receive revenue back to our Nation.”

The Navajo Times advanced a similar argument in an April 14 op ed, noting that the decision on the generating station put the community at a crossroads.

“Down one path is the opportunity to transition to a clean energy economy that will provide revenue, jobs, and security to Navajo families for generations to come,” the publication noted. “Down the other is the feeble extension of the plant’s life—and the jobs that come with it—for a few more years, but yields little hope for today’s youth when the plant closes around the time they start raising their own families.”

The op ed added that “a move to clean energy offers hope for righting years of wrongs related to the health and economic sacrifices the Navajo people have made for decades in the name of providing electricity and water to millions of people in the southwest. The status quo offers more of the same—more pollution leaving our people with asthma and other health problems, more depletion of our vital water resources, and more exploitation of Navajo energy resources.”