Canada is 1.7°C Warmer Than in 1948, and Future Extreme Heat Will Hit Public Health 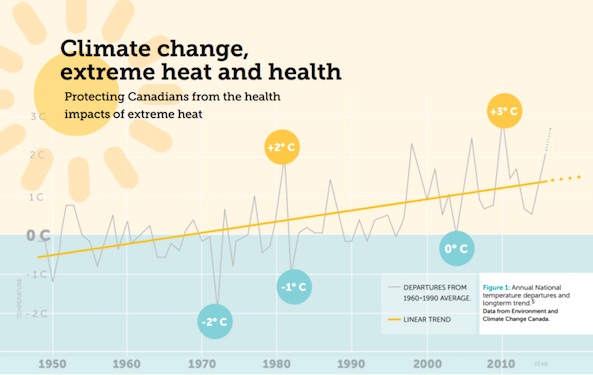 Canada was 1.7°C/3.0°F warmer in 2016 than it was in 1948, with the biggest temperature increases taking place in the winter months and the country’s northern territories, the Science Media Centre of Canada concludes in a backgrounder on climate change, extreme heat, and public health.

“Warming of a degree or two may seem small, but it’s important to remember that these are average temperatures covering an entire year, and as average temperatures rise, so too does the occurrence of more extreme events,” states the five-page report, produced by SMCC with Health Canada funding.

The report anticipates a doubling in the number of days above 30°C in Toronto, Winnipeg, and Windsor, with significant increases ahead for Hamilton, Kingston, Montreal, and Fredericton. “A record-breaking heat event that had previously occurred once every 20 years may well occur once every other year by 2100,” and extreme heat will become more common across the Great Lakes region and the Saskatchewan and Alberta plains.

While anyone can be at risk from extreme heat, SMCC says a person’s vulnerability is determined in part by their physiology and their ability to take protective action. Children and senior “sweat less and may rely on caregivers to take actions to prevent illness during extreme heat events, or to notice they’re suffering in the heat,” the backgrounder notes. “Factors that can influence whether an extreme heat event poses a health risk to people include urban heat islands, a city’s proximity to water, access to air conditioning, the population’s vulnerability to extreme heat, and its experience with high temperatures.” (h/t to CleanTechnica for pointing us to this report)