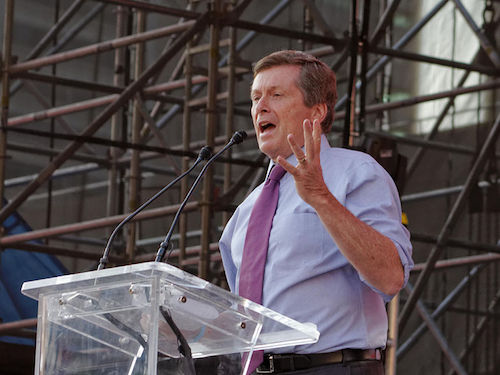 Canada’s biggest city may be about to lose crucial momentum on its commitment to cut greenhouse gas emissions 80% by 2050, with Mayor John Tory believed to be waffling on the target ahead of a crucial city council vote July 4.

The Energy Mix has learned that local advocates spent much of the Canada Day weekend in a last-minute push to nail down the votes to support the city’s ambitious TransformTO plan, after months of consultation and debate culminated in a disappointingly equivocal statement of support from the mayor.

The ultimate question: Whether John Tory is willing to spend a mere $6.7 million, just a tiny fraction of his city’s annual budget, to join municipalities’ global push for climate action. ClimateFast Chair Lyn Adamson and other advocates are urging supporters to attend tomorrow’s City Council meeting to show overwhelming support for the plan.

“Your emails and calls to the Mayor and your member of Council are very much needed at this time,” Adamson wrote in a June 30 email to supporters. “July 4 is noted as being U.S. Independence Day, but in Toronto on July 4 we could make revolutionary change in our city.”

But there’s an important catch:

“Staff have made it clear that only by adopting—and funding—the full plan will we be able to reach our climate target: an 80% reduction in GHG emissions by 2050,” Adamson wrote. “The full plan. Not just the parts that don’t cost us money or that can be funded by another level of government. The full program.”

In mid-June, John Cartwright, president of the Toronto and York Region Labour Council, pointed to TransformTO as the city’s opportunity to show climate leadership, at just the moment when municipalities world-wide are stepping up to help fill the gap left by Donald Trump’s decision to withdraw the United States from the Paris agreement.

“In an increasingly urbanized world, 70% of global emissions originate in cities,” Cartwright wrote. “Toronto, like other cities, is already reducing its carbon footprint. But the TransformTO analysis shows that it’s not happening fast enough. Under the business-as-planned scenario, Toronto would miss its 2050 target by a staggering 8.7 million tonnes of climate-warming greenhouse gas emissions. And that takes into account measures such as approved transit investments and the City’s long-term waste strategy.”

TransformTO was set up to deliver two reports, based on community consultations and technical scenario modelling. The first, containing short-term measures to keep Toronto on track to cut emissions 30% by 2020, was delivered in December. The second, containing long-term strategies through 2050, was approved by the city’s parks and environment committee May 4. It laid out a suite of measures to mobilize low-carbon neighbourhoods, get the city ready for electric mobility, and develop the work force for high-performance buildings.

It stressed that “decisions the City makes in the next five years will determine Toronto’s carbon emissions for up to a century.”

Key TransformTO recommendations include a 65% reduction in community-wide emissions from 1990 levels by 2030, a near-zero emissions target for all new buildings by 2030, a 40% average energy improvement in existing buildings by 2050, 95% of waste diverted away from landfills by 2050, and 100% low-carbon transportation, with three-quarters of trips up to five kilometres shifted to walking or biking, by mid-century.

‘It is extremely important that this plan is approved in full,” Adamson told The Mix. “This is not a time to cherry-pick the plan. So we are concerned that the Mayor has called the plan ‘broad’ and has hinted we may not do it all. We need Torontonians to speak up and tell the Mayor and their councillor that they want to see this program passed, and then fully funded,” to deliver on the “enormous benefits in job creation and improved transit” that will result.

In a June 29 YouTube video headlined as “John Tory’s Bold Vision to Reduce Greenhouse Gas (GHG) Emissions by 80%”, the mayor expressed concern that “it’s a very broad plan that, no matter who was looking at it, I think would agree that it’s not possible to do everything at once.” Instead, with $6.7 million in possible city funding in play for 2018, he said councillors should assess the items in the plan and determine “how fast can you do it, how much is it going to cost, and what difference is it going to make” in reducing emissions.

“It’s like saying, ‘Which of the legs in a three-legged stool are we going to get rid of?’” retorted Toronto Environmental Alliance Executive Director Franz Hartmann. “What council is looking at is [already] the result of a priority-setting exercise,” he added, noting that the $6.7-million allocation is a “drop in the bucket” compared to the city’s multi-billion-dollar annual budget.

Councillor Gord Perks, a former Greenpeace campaigner, said the TransformTO decision had already been postponed because of backroom discussions over budget priorities.

“This is very explicitly a consequence of the mayor trying to set a budget direction without having clear policy goals, such as protecting the climate, protected from his budget freeze,” he said. “The climate doesn’t care if we make a good try. The climate cares if we are able to keep the level of greenhouse gases in the atmosphere below a certain level. You can’t do that if you cut the plan up.”