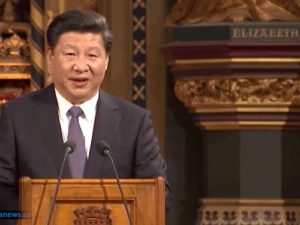 Chinese President Xi Jinping is pushing ahead with high-stakes plans to open the world’s biggest carbon market, a project that has been in the works for years but “is now shaping up as Mr. Xi’s big policy retort” to Donald Trump’s withdrawal from the Paris agreement, the New York Times reports.

“Carbon trading on a national scale will send a signal to the world that China is serious about this,” said Prof. Wang Yi of the Chinese Academy of Sciences. But “it’s a really complicated task. That’s precisely why China must work on this in a steady way and mustn’t fail. If China’s carbon market fails, that will be a big blow not just to China, but also to global carbon markets.”

The Times explains that it could take years to get the system running smoothly, and “major setbacks in the nascent market could embarrass China and undermine global support for using cap-and-trade measures to reduce the greenhouse gases that are causing warming.”

China has been working on its carbon market for years, studying similar initiatives in Europe and California and seeking advice from sources like the U.S. Environmental Defense Fund. “But creating a government-mandated market has rarely been easy,” the Times notes. “China has a huge industrial sector dominated by state conglomerates that can outgun regulators and ignore laws,” and “officials habitually meddle in markets.”

Finding the right data has been a major challenge, said Paulson Institute Senior Fellow Deborah Lehr. “To move to emissions trading, you need to have realistic numbers on how to start to price these emissions.”

Several months ago, China’s National Development and Reform Commission announced the first phase of the national market would be limited to coal-fired generation, cement, and aluminum—all industries with relatively simple processes that make it easier to collect data. Stian Reklev, Beijing-based founder of Carbon Pulse, said it makes sense to start a carbon market with a smaller range of sectors.

“It’s still going to be a massive challenge to make it work,” he warned. “Anyone who thinks the Chinese scheme will be effective in making big cuts in emissions from the start is going to be disappointed.”