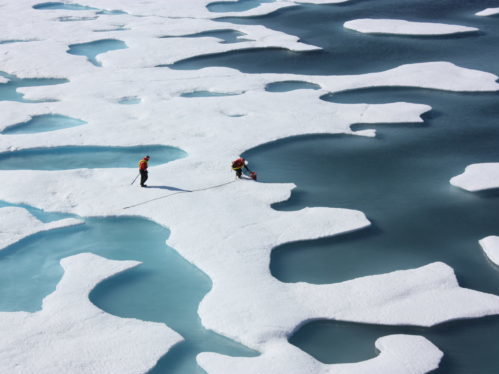 Dozens of Canadian climate scientists involved with seven different research projects are in the counter-intuitive position of preparing to shut down their work and lay off staff, after this year’s federal budget failed to prevent the sunset of the $35-million-per year Climate Change and Atmospheric Research (CCAR) program.

“The break comes despite the Trudeau government’s repeated emphasis on the need for science-based decision-making in response to climate change,” the Globe and Mail reports. When they saw that the federal budget contained no funds to renew or replace CCAR, “researchers realized they would be pulling the plug on projects that have taken years to build up.”

As a result of the budget cut, six of CCAR’s seven projects will run out of funds at the end of the year, while a seventh, the Canadian Sea Ice and Snow Evolution Network, will continue through next year with no funding increase.

“All the right words are there, but somehow research groups are going to be dismantled within a few months and nothing is going to appear to prevent this,” said University of Quebec at Montreal climate scientist René Laprise.

“This style of having one funding call every five or six years just makes it impossible to have a stable, sustainable research program in climate,” said University of Toronto climate scientist Paul Kushner.

Reporter Ivan Semeniuk recalls that CCAR formed during the Harper years, after the government of the day defunded the Canadian Foundation for Climate and Atmospheric Sciences. The changeover from the old program to the new one “led to irreparable breaks in data collection and drove students and research associates to leave the country or give up on atmospheric research.”

While this year’s federal budget does include C$73.5 million over five years to set up a Canadian centre for climate services, Environment and Climate Change Canada’s Mark Johnson told the Globe it is not intended to replace CCAR. A spokesperson for the Natural Science and Engineering Research Council, which runs CCAR, said researchers can still apply for grants through funding programs available to all academic disciplines.

China Aims for 120 Gigawatt-Hours of Battery Production by 2021