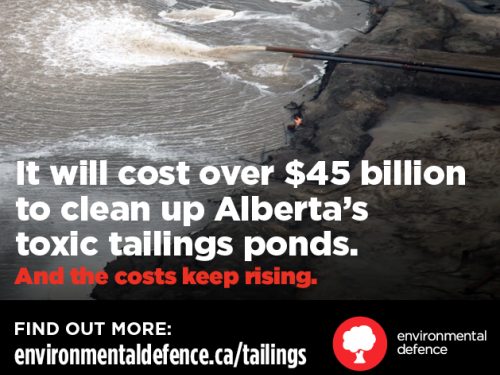 Alberta is unprepared for the tens of billions of dollars in costs its taxpayers may face to clean up the vast tailing ponds along the Athabasca River corridor, where more than a trillion litres of highly toxic tar sands/oil sands waste are (more or less) contained, states a new report this week by Environmental Defence and the Natural Resources Defense Council.

The tailings ponds have been growing for half a century. The expanses of greasy, black sand and toxics-laden liquids now cover more territory than Manhattan and Boston combined, and only a tiny fraction of that total has been remediated. The report estimates cleanup costs at $44.5 billion as of the end of 2016, noting that the figure “does not include the estimated $6.8 billion needed for land reclamation and additional costs (not estimated) for water treatment and ongoing monitoring and maintenance.”

The tar sand/oil sand industry “pays into a Mine Financial Security Program which is meant to cover the clean-up costs of the oil sands industry,” the two organizations state. That fund has so far collected only $1.57 billion, “leaving 93% to 97% of the cost to Alberta taxpayers.”

“The potential taxpayer liability for tailings cleanup alone now exceeds the $41.3 billion in royalties the province of Alberta has collected from the oil sands industry from 1970 to 2016,” the report asserts.

Environmental Defence analyzed industry data to conclude that the tailings ponds leak an astonishing 11 million litres of waste per day, the equivalent of nearly 70,000 barrels of oil. Environment Canada scientists have referenced research finding “that a single pond can leak 6.5 million litres per day.” Meanwhile, toxic but volatile polycyclic aromatic hydrocarbons (PAHs) “are evaporating from the ponds and being deposited in Alberta’s water systems at a rate that could be as high as from tailings seepage.” Indeed, researchers who made the first direct readings of airborne volatile organic compounds (VOCs) over Alberta’s tar sands/oil sands mines found concentrations four times higher than mine operators have been reporting to Environment Canada’s National Pollutant Release Inventory.

Environmental Defence and NRDC urge Alberta to “halt all new tailings developments until industry successfully demonstrates that it is capable of properly reclaiming them. The government should also ensure that industry, rather than Alberta taxpayers, be required to pay for the clean-up of industry’s polluting projects.”

Meanwhile, two environmental groups and Daniel T’seleie of the K’ahsho Got’ine Dene First Nation have also filed a request with the NAFTA Commission for Environmental Cooperation (CEC), asking it to investigate the Canadian government for failing to enforce the Fisheries Act by allowing tar sands/oil sands tailings ponds to leak into Alberta water bodies. Investigations of previous submissions making similar allegations were frozen after intervention by the Harper government.

this is criminal and who pays for the cleanup? taxpayers…not the perpetrators….someone should go after these bastards…like the RCMP..oh wait..they’re in on it….guess we’ll have to cough up…again. Thanks Tories for your knee dip to the oil mafia.

Any development permit should include total funding for returning all back to environmentally safe and aesthetically pleasing stage within the same period it takes to demobilization the equipment and supplies. And or have 110% of the costs to do so in cash held by the province… no if’s, and’s or but’s! Period.