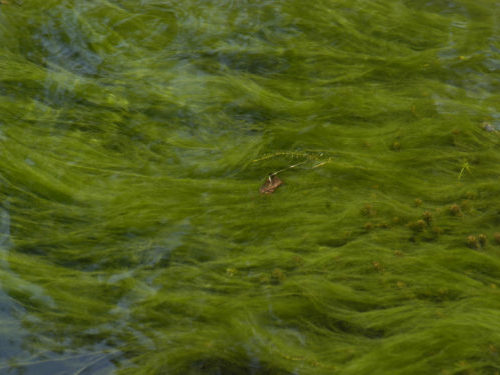 An eight-year research collaboration between ExxonMobil and Synthetic Genomics had used advanced genetic engineering to double the oil content of a specialized algae strain from 20 to 40%, without inhibiting its growth, according to a paper published last week in the journal Nature Biotechnology.

“This key milestone in our advanced biofuels program confirms our belief that algae can be incredibly productive as a renewable energy source without adverse impacts on climate, land, and water,” said Exxon Vice President for Research and Development Vijay Swarup. “Our work with Synthetic Genomics continues to be an important part of our broader research into lower-emission technologies to reduce the risk of climate change.”

The joint research team “identified a biological switch called ZnCys that regulates the conversion of carbon to oil in Nannochloropsis gaditana, an algal species that grows in seawater and is a leading candidate for biofuel production,” the Financial Times reports. “Through genetic manipulation, they fine-tuned the process to double the proportion of lipid in the algal biomass.”

On previous attempts, the algae cells had stopped growing when they became overloaded with lipid, or oil. “The new genetic process maintains growth until 40% of the biomass consists of lipid, an industrially useful level,” the Times notes.

The announcement is a first major result of a 10-year, US$600-million partnership that began in 2009. “We are pursuing a policy of aggressive patience,” Swarup said.