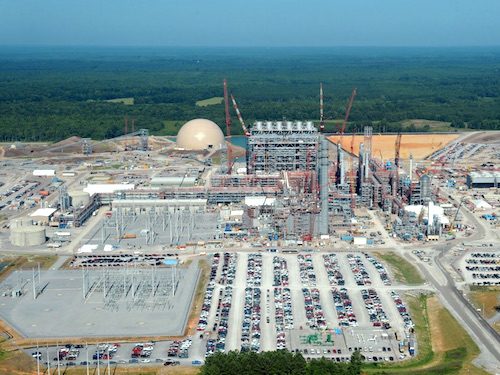 In a unanimous vote Wednesday morning, the three members of the Mississippi Public Service Commission pulled the plug on the Kemper “clean” coal facility and instructed Southern Company, the utility behind the project, to run it on natural gas instead.

The cost of the project had spiralled from US$2.3 billion in 2010 to $7.5 billion now, with no end in sight, DeSmog Blog reports. Kemper “has already pushed up rates by 15%, despite the failure of the small, 585-megawatt facility’s proprietary gasification technology,” designed to turn plentiful but high-emitting lignite into a synthetic gas that can cleanly generate electricity.

Kemper “was also designed to strip out carbon dioxide and pump it into a nearby oil field to force out more oil, as well as using off-gases to produce sulphuric acid for industrial sale,” DeSmog adds. “But without gasification, none of these expensive added technologies is working.”

“I think it’s high time we finally turn the corner on this project and also strongly protect our ratepayers, who should only have to pay for what actually delivers electricity,” said PSC Chair Brandon Presley. The decision “eliminates ratepayer risk for unproven technology and assures no rate increase to Mississippi Power customers,” the three commissioners added in a release.

“I applaud the commission for doing what needed to be done, and driving a stake through the heart of this so-called clean coal project,” said Sierra Club statewide director Louie Miller. “I think this is the beginning of the end of a long nightmare for Mississippi power customers. This is a boondoggle that should never have been built in the first place.”

The PSC vote, cemented by the election of two new commissioners in 2015, is the latest for an elaborate “clean” coal experiment that “has drawn national attention for promising to be the first coal plant of its kind and size to operate commercially in the U.S.,” recalls the local newspaper, the Meridian Star. “The project is now known as one of the most expensive power plants ever built. A portion of the plant has been running on natural gas since August 2014, but the portion designed to produce electricity from lignite coal is not complete.”

On the IEEFA blog, Bloomberg News notes that “settling for gas only at Southern’s Kemper plant threatens to undermine the business rationale for the kind of clean coal technology the Trump administration has hailed as a way to save jobs at mines. It would mark the end of a very costly venture that has company investors demanding pay cuts for executives. The utility owner is also grappling with its long-delayed, over-budget Vogtle nuclear project in Georgia.”

“Clean coal was a very uncertain prospect after all the cost overruns, and difficulty getting the gasifiers to work just makes it worse,” said Bloomberg Intelligence utilities analyst Kit Konolige. “Gas is so cheap it would have been an uphill battle even if this plant had been finished on time and on budget.”