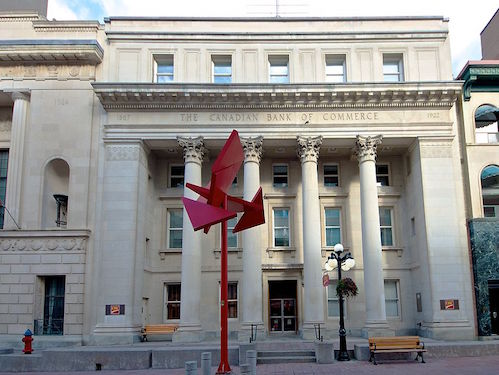 Three dozen major private banks from Europe, the United States, Canada, Japan, China, and Australia funneled US$87 billion into “extreme fossil fuel” projects in 2016 and $290 billion over the last three years, according to the latest in an annual series of fossil fuel finance report cards produced by four leading environment and energy groups.

Among the five Canadian banks covered by the report, the Bank of Nova Scotia and CIBC received F grades, the Royal Bank of Canada and Bank of Montreal were rated D-, and TD Bank got a C+. At $18.2 billion, RBC had the fifth-highest three-year investment total across the 37 banks in the report card.

While the 2016 total for all the institutions was 22% lower than the $111 billion they invested in extreme fossils in 2015, “the $290 billion of direct and indirect financing for extreme fossil fuels over the last three years represents new investment in the exact subsectors whose expansion is most at odds with reaching climate targets, respecting human rights, and preserving ecosystems,” report the Rainforest Action Network, BankTrack, the U.S. Sierra Club, and Oil Change International.

The report points to $105.6 billion the banks directed to Arctic, tar sands/oil sands, and ultra-deep offshore oil projects from 2014 to 2016, including $47.8 billion for tar sands/oil sands mobilized by the Royal Bank of Canada and $48.7 billion for ultra-deepwater oil by JPMorgan Chase. Major institutions led by the Bank of China and Deutsche Bank have put $58 billion into new coal mines, while China Construction Bank, three of its national peers, and JPMorgan Chase directed $74.7 billion to coal-fired generation.

JPMorgan was the leader again on liquefied natural gas (LNG) investments that totaled $51.6 billion over the three-year span.

“Bank fossil fuel policy grades are poor, particularly with regards to extreme oil and gas. The four Chinese banks and three Japanese banks analyzed scored an F in all subsectors,” the report states. “Across the board, bank policies fall far short of restricting financing of extreme fossil fuels to the extent that is required to reach climate stability.”

Pointing to sustained international support for the Paris agreement, the report notes that “with or without participation from the United States, the mandate for the global financial industry has been set by the international community. Accordingly, banks must align their business practices with a 1.5°C world, stop funding extreme fossil fuels, and ensure that their financing respects human rights.”

2,500 Cities Back Climate Action, as Legislators from 45 States ‘Explicitly Refuse’ to Stand with Trump