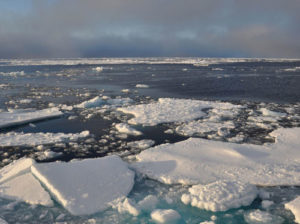 Antarctica has been melting due to multiple influences brought on by a changing climate, and now there’s disturbing evidence that the melt is speeding up.

“In the past few months alone, researchers have chronicled a seasonal waterfall, widespread networks of rivers and melt ponds, and an iceberg the size of Delaware on the brink of breaking away from the thawing landscape,” notes Climate Central. “Researchers have documented rain on a continent more known for snow, and widespread surface melt in West Antarctica, one of the most unstable parts of [the] continent.”

One of the most troubling phenomena is the combination of melting conditions on both the upper and lower surfaces of ice shelves that extend out over the sea, reported recently in the journal Nature Communications. The double-jeopardy effect is linked to last year’s powerful El Niño, a recurring oceanic phenomenon that is projected to occur twice as often in the near future as historically, as the climate adjusts to additional heat.

“There’s a substantial loss of ice going on from warm water eating away at the bottom of some critical ice shelves,” said Ohio State climate modeller David Bromwich. “If we’ve got a lot of melting from the top as well, that means things would proceed even faster. It’s not a good prescription.”

Other research has shown that at a certain point the collapse of weakened ice shelves could become irreversible, releasing enough water to the oceans to raise their level by more than three metres.