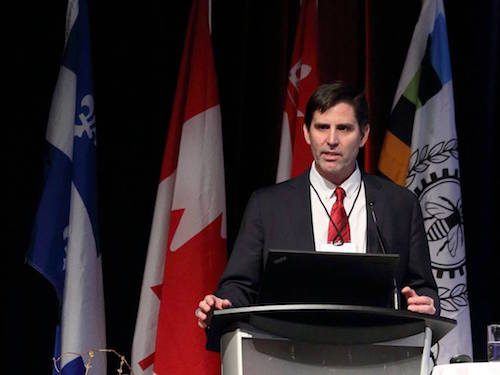 A battle in the pages of the Proceedings of the National Academy of Sciences is pitting Stanford University’s Mark Z. Jacobson, proponent of a “wind, water, and solar” approach to a 100% renewable energy future, against a group of 21 climate and energy specialists calling for a broader mix of technologies.

Both camps agree on the urgent need to decarbonize global energy systems, and on the pre-eminence of renewable energy in the eventual winning combination. But they’re contending mightily on the details.

UPDATE: On Medium this morning, Climate Progress Founding Editor Joe Romm is urging all parties to stand down and get on with the job of delivering a 100% RE future. Jacobson’s original paper in 2015 was a “theoretical exercise”, he writes, and “I don’t see the point of all these scholars spending so much effort debunking a piece that, frankly, is quite out of date. All of these researchers understand how the reality of climate change and rapidly improving technology makes it both essential and indeed inevitable that the electric grid will be essentially carbon-free by 2055. That’s the forest we mustn’t miss for the trees.”

Jacobson contends that the critics, led by grid modelling consultant Christopher Clack and Stanford geoengineering proponent Ken Caldeira, are mostly miffed that his 2015 modelling left out the biomass, nuclear, and fossil plants with carbon capture that many of them have emphasized in their work. “Virtually every sentence in the Clack article is false as evidenced by [my] line-by-line response,” he told Greentech Media in an email. “There is not a single error in our paper.”

The critics say they’re concerned that Jacobson’s model is beginning to drive policy, but could drive costs out of control as implementation gains momentum. His scenarios “can, at best, be described as a poorly executed exploration of an interesting hypothesis,” they write. “If one reaches a new conclusion by not addressing factors considered by others, making a large set of unsupported assumptions, using simpler models that do not consider important features, and then performing an analysis that contains critical mistakes, the anomalous conclusion cannot be heralded as a new discovery.”

Yet the technologies the Clack group would add to the mix—news coverage over the last 24 hours has focused primarily on nuclear and CCS—raise killer cost concerns of their own. Moreover, while Caldeira and some other climate scientists call for deployment of a new generation of nuclear generators, “nuclear liabilities cited by Jacobson include the threat of future Fukushima-like disasters, nuclear weapons proliferation facilitated by large-scale uranium enrichment, and the financial risks such as those that recently bankrupted Westinghouse,” IEEE Spectrum reports. “And, as he notes in his rebuttal, the Intergovernmental Panel on Climate Change has determined there is ‘robust evidence’ and ‘high agreement’ among experts validating these nuclear risks.”

Spectrum adds that Jacobson’s concern about CCS centres on the black carbon, or soot, that fossil plants would still emit, even if carbon capture could some day be made to work reliably and affordably. In a 2001 paper in the journal Nature, Jacobson “controversially argued that soot in the air and on blackened snow and ice fields absorbs enough heat to make its climate impact second only to CO2,” notes correspondent Peter Fairley. “Sixteen years on, that view now enjoys strong support from the science community,” and was the basis for Jacobson to push California regulators to reject now-discredited “clean diesel” technology.

Although the Jacobson-Clack confrontation promises to be long, loud, and granular, Spectrum notes that the two have more in common than not. “What is certain, from the darkening findings of climate science, is that climate change calls for a bold remake of the global energy system of the sort that both Clack and Jacobson have championed,” Fairley writes. “Their respective visions certainly appear to have more in common than ever as the Trump administration seeks to turn back the clock on grid engineering.”