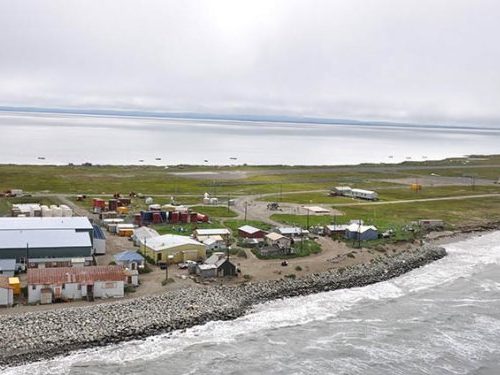 The story of Kivalina, the Iñupiat town in Alaska that will soon have to relocate due to climate change, has been developing for years. But now, Triple Pundit is out with a profile of two other U.S. communities whose residents share the dubious distinction of becoming the country’s first climate refugees.

“For many Americans, the real evidence of global warming is at home, in our houses, and on our streets,” the online news outlet notes. Kivalina has received considerable coverage over the last four or so years “because of the financial dilemma that was increasingly facing a Native American town that couldn’t afford to move, and didn’t have the government funding to make it happen the way the residents wanted.”

That situation has become increasingly dire, with the cost of relocating the town’s 400 residents estimated at US$100 to $400 million. But now, Kivalina isn’t alone: The Chukchi Sea community of Shismaref voted to move in 2016, and the predominantly Native American community of Isle de Jean Charles in coastal Louisiana “had been reduced to a strip of land large enough to maintain a county road and a diminishing number of houses” by 2015, Triple Pundit notes. “Today, the town is under full assault from rising gulf waters and has become uninhabitable.”

Isle de Jean Charles has fared better than the two more northerly communities—the price tag for relocating the 25 remaining families is lower, and the dollars came through from the U.S. government a couple of years ago. Funding for the Alaskan relocations died in Congress in 2016.

According to Alice Thomas, climate displacement program manager at Refugees International, the initial wave of climate refugees points to the lack of federal programs in the U.S. to address a type of relocation that will become more common with time. “There’s no federal or state law — no institution in the United States — with a mandate for how are we going to manage relocation internally,” she recently told CNN. (h/t to Environmental News Bits for pointing us to this story)