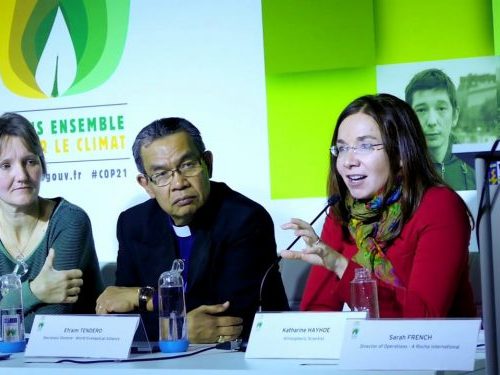 A senior writer and climate hawk at Grist, a U.S. environmental daily, is urging his country’s climate scientists not to take French President Emmanuel Macron up on his offer of a welcoming professional home across the ocean.

Nathanael Johnson says he “applauded and played along” in February, when then-candidate Macron offered traumatized U.S. researchers and inventors refuge from four years of hostility and attack under Trump. “Let’s face it,” he wrote at the time. “France is a tough sell. The food is irritatingly fresh, the architecture tends to distract people from their cell phones, and the high-speed rail lines get in the way of SUVs.”

But now that Macron is offering a four-year grant for climate project leaders from anywhere in the world, “it’s no longer funny,” Johnson writes. “If you’re an entrepreneur, scientist, or engineer disillusioned with Trump’s America and tempted by this offer, please don’t go. It’s a terrible idea. Do you hear me, Katharine Hayhoe?”

But what Johnson’s really worried about is a brain drain that will hurt the U.S. for far longer than a four-year White House term for Trump (or Pence, or Ryan) once the migration begins.

“Science, technologies, and companies created in France won’t be constrained by French borders. We’ll all benefit,” he acknowledges. “And it’s just for four years, the nominal length of Trump’s (first) term. But c’mon, be real: Nobody goes to France to live for just four years.”

Let Trump Win on Paris Renegotiation ‘If We Can Stomach It’, Diringer Urges