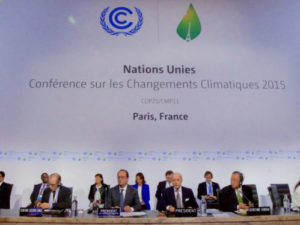 A veteran U.S. climate negotiator is suggesting the global community give Donald Trump a win on “renegotiating” the Paris agreement “if we can stomach it”, as a way of keeping the U.S. in the landmark global deal without reopening its key provisions.

“To be clear, the basic terms of Paris are not open for renegotiation,” writes Elliot Diringer of the Center for Climate and Energy Solutions (C2ES). “Other countries regard them as a sensible balancing of national interests against an urgent common threat. And they are weary of accommodating the vagaries of U.S. climate politics. After all, this agreement, like the Kyoto Protocol, was designed largely to U.S. specifications.”

But amid the global and domestic outrage at the White House decision to step away from the Paris deal, it’s a good thing that “Trump did not declare a clean break from the global climate effort”, and “says he is willing to rework the deal,” Diringer suggests. “That opening, if properly navigated, could produce another dramatic proclamation, this one keeping the United States in.”

In his post in the journal Nature, Diringer contends that countries might allow Trump some leeway for the same reason so many advocates fought to prevent the Rose Garden announcement two weeks ago. “For now, his announcement may have a galvanizing effect,” he writes. “But over time, the formal exit of the world’s largest economy risks corroding global ambition.”

The key to a different outcome would be to allow the U.S. to reduce its voluntary greenhouse gas reductions under the Paris deal—the same option international negotiators held out during the desperate scramble to forestall the announcement. But a counterargument has emerged in the last couple of weeks, with veteran climate hawks pointing out that the U.S. withdrawal keeps the Paris agreement’s crucial ambition mechanism intact.

Allowing Trump to scale back the U.S. commitment would have “set a damaging precedent,” warned Christian Holz, senior research associate at the Climate Equity Reference Project, and one of Canada’s most knowledgeable observers of international climate negotiations. “It would severely undermine the whole point of the Paris agreement that the direction of travel is only forward, that every few years countries have to come back with pledges that are more ambitious than the previous.”

That prospect might still be irresistible for Trump, however. “The president has shown that he’s motivated more by the ‘deal’ than its substance, and that his extreme opening positions are just that,” Diringer states. “With his Rose Garden speech, Trump checked one box and drew another. He fulfilled his campaign pledge to leave Paris, and he told Americans he’s now going for a better deal. Coming back with a reduced target could be enticing precisely because it would allow him to claim another win.”

[Enticing for the global community, as well, as long as ‘enticing’ means caving in to a bully or rewarding a toddler for his latest tantrum. Teachable moment, anyone? – Ed.]

InsideClimate News, meanwhile, points to the continuing risk that the U.S. will try to obstruct implementation of the Paris deal until its withdrawal formally takes effect on November 4, 2020. “One hopes that this is it for the United States in terms of trying to do damage to the agreement,” said former Environmental Protection Agency administrator William K. Reilly. “There’s a possibility of the United States playing a role to try to reduce the commitments or aspirations that are agreed to in future…And that would be very unfortunate and pernicious.”