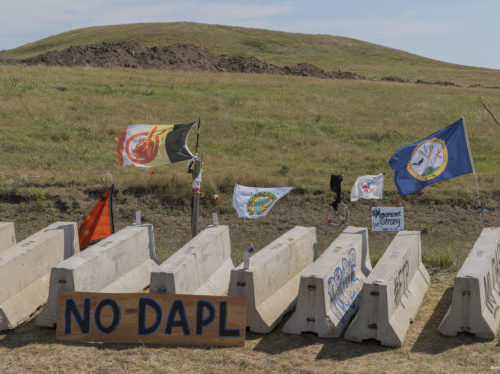 A U.S. federal judge has ordered an expanded environmental review of the Dakota Access pipeline, in what InsideClimate News casts as “a setback for the Trump administration’s drive to ramp up fossil fuel development, and a tentative victory for the Standing Rock Sioux tribe.”

The U.S. Army Corps of Engineers “did not adequately consider the impacts of an oil spill on fishing rights, hunting rights, or environmental justice, or the degree to which the pipeline’s effects are likely to be highly controversial,” District Judge James Boasberg wrote Wednesday. “The Court cannot conclude that the Corps made a convincing case of no significant impact or took the requisite hard look.”

The Corps made its decision to permit the pipeline crossing under the Missouri River, just a half-mile upstream from the Standing Rock Reservation, on February 3, just two weeks after Donald Trump entered the White House. This week, Boasberg did not order a stop to the flow of oil through the pipeline, but said that decision “will be the subject of further briefing.”

While the Army Corps “largely complied” with the law in its decision not to issue a detailed impact assessment for the project, ICN notes that “the exceptions were substantial.” The Corps offered no “acknowledgment of or attention to the impact of an oil spill on the Tribe’s fishing and hunting rights,” Boasberg wrote, and its conclusion that the project would have “no direct or indirect effects to the Standing Rock Sioux Tribe” only factored in construction, not the potential for a spill during pipeline operation.

“Furthermore, the treatment fell short of the Corps’ duty to determine whether the project would have a disproportionate impact on minority and low-income populations, as the agency is required to do by law,” writes ICN reporter Marianne Lavelle. Even if the Corps declined to address the project’s social and economic impacts, including damage to Standing Rock members’ fishing, hunting, and other substance activities, “it needed to offer more than a bare-bones conclusion that Standing Rock would not be disproportionately harmed by a spill,” Boasberg stated.

“Until now, the rights of the Standing Rock Sioux tribe have been disregarded by the builders of the Dakota Access pipeline and the Trump administration—prompting a well-deserved global outcry,” he told Lavelle. “The federal courts have stepped in where our political systems have failed to protect the rights of Native communities.”