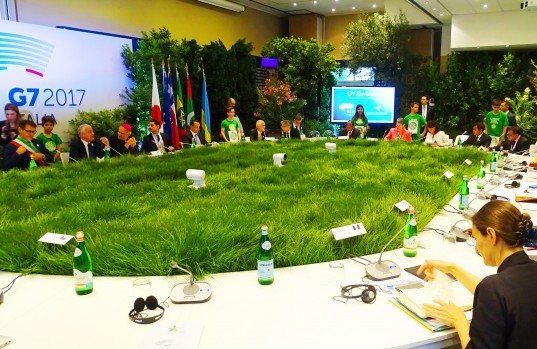 An empty seat at the table/rinnovabili.it

“The U.S. is now left as a footnote to climate action and that’s very sad,” McKenna told Reuters, following a meeting of G7 environment ministers in Bologna, Italy. During the meeting, delegations from six questions made it clear to U.S. EPA Administrator Scott Pruitt that American renunciation of the Paris agreement won’t deter the rest of the G7 from taking climate action—and that there is no scope for the U.S. to renegotiate the agreement or dictate amendments, Donald Trump’s fulminations notwithstanding. In a 20-minute side meeting with Pruitt, McKenna reportedly reinforced the reality that reopening the historic global deal is not in the cards.

The climate-denying EPA administrator left the summit after the opening statements, and the junior U.S. diplomats he left behind declined to join senior peers from Canada, France, Germany, Italy, Japan, the United Kingdom, and the European Union in endorsing summit statements on climate change and international development banks. Italy’s environment minister, Gian Luca Galletti, called the Paris accord “irreversible, non-negotiable, and the only instrument possible to combat climate change,” adding that other G7 countries hoped to continue “constructive dialogue” with the U.S. within the “Paris parameters”.

“The unprecedented split is another clear signal that the rest of the world is forging ahead with the actions needed to meet the climate crisis,” despite Trump’s decision to withdraw the U.S. from the agreement, observed Alden Meyer, Director of Strategy for the Union of Concerned Scientists. “Together with the pledges made by a growing coalition of U.S. mayors, governors, business leaders, and others to meet America’s Paris commitments without him, the meeting highlights…Trump’s increasing isolation on climate and clean energy issues, both at home and abroad.”

As the G7 ministers’ final statement makes clear, Meyer added, “there is no appetite to ‘renegotiate’ the Paris agreement, and the drive towards a global economy based on clean, renewable energy will continue full speed ahead,” despite Trump’s and Pruitt’s efforts to slow it down.

In a literal footnote to the communique, the U.S. delegation said the country “will continue to engage with key international partners in a manner that is consistent with our domestic priorities, preserving both a strong economy and a healthy environment.” In a separate statement, the EPA insisted Pruitt’s attendance had “reset the climate change discussion” at the G7 meeting.

In a second communiqué at the end of the event, reported by the UN Climate Action Programme, the United States did endorse—although without commitments—the G7 ministers’ collective call on members to increase financing for the 2030 Agenda for Sustainable Development, to address “resource efficiency, marine litter, [and] green jobs,” while pointedly abstaining from its call for climate action.

In Beijing, meanwhile, where the annual Clean Energy Ministerial convened, the message “from the heads of the International Energy Agency (IEA), the International Renewable Energy Agency, and numerous other speakers was clear and forceful,” report Merran Smith and Dan Woynillowicz, executive director and policy director at Clean Energy Canada: “The transition to clean energy is irreversible.”

Electric vehicle, energy storage, and photovoltaic and wind generation technologies are all developing along tracks that Smith and Woynillowicz call “2DS-compatible”—meaning they’re in line with a scenario to achieve the Paris goal of limiting global warming to 2ºC above pre-industrial levels. But energy efficiency, and private corporate investment in the low-carbon transition, both lag behind what is called for to hit the target.