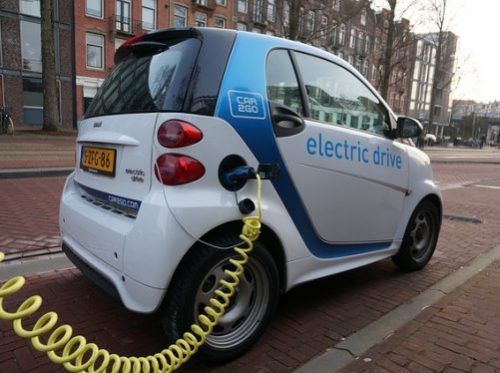 Car dealerships could go the way of the vanished video store in as little as 10 years, a San Francisco think tank argues.

In their study for RethinkX, technology investor James Arbib and Stanford University economist Tony Seba argue that “greater demand for electric cars, coupled with increased demand for ride sharing” will kill off the familiar car dealership, with its new and used lots and service bays, in the next seven years, CBC News reports.

Arbib and Seba believe the tipping point will come once electric cars can travel more than 320 kilometres on a single charge and cost in “the $20,000-dollar range,” instead of $30,000 and up.

Dealers may continue to sell vehicles (although Tesla has challenged that model, suing U.S. states for the right to sell directly to customers), but their revenues will be threatened. A main culprit is that EVs—apart from their batteries—are likely to last longer than gasoline or diesel cars, simply due to their simplicity. “You only have 20 moving parts in the power train of an electric vehicle, but 2,000 in the power train of a gasoline vehicle, so there is far less to go wrong,” said Arbib.

“Right now, Tesla is offering infinite kilometre warranties,” CBC News reports. Arbib expects the lifetime of these vehicles to be about 800,000 kilometres in the early 2020s, and potentially 1.6 million kilometres by 2030. That has several implications. Dealers will see fewer replacement sales as vehicles last longer, CBC notes. And “people will spend less time bringing in their cars to dealerships for repairs and servicing.”

The two Californians also expect big things from various forms of car- and ride-sharing. By 2020, they write, “using transport as a service will be four to 10 times cheaper per mile than buying a new car, and two to four times cheaper than operating an existing paid-off vehicle.”

The report lands as Canadians have been snapping up new gas and diesel vehicles at record rates, supporting more than 150,000 jobs at dealerships in the first quarter of 2017. Doug Heeney, a fleet sales manager at busy Campbell Ford in Ottawa, dismissed the report’s outlook. EVs will “be a percentage of our industry,” Heeney forecast, “but I don’t think the electric vehicle, especially in Canada, is going to overtake or eliminate the current vehicles we’ve got for sale.”

Ontario auto industry analyst Dennis Desrosiers found “some serious questions marks and a lot of assumptions” in the two authors’ forecast. In particular, Desrosiers doubts the pair’s predictions about the falling cost of manufacturing and operating electric vehicles.

The Californians are far from alone, however. Swiss investment bank UBS, factoring in those lower repair and fuel costs, predicts that electric vehicles will be cheaper to own and operate than gasoline models by next year. Bloomberg forecasts that EVs will carry lower initial sticker prices before 2025. And the Financial Post reported recently that some in the fossil energy supply industry are beginning to worry that “the rising relevance of electric vehicles, along with drastically reduced costs for wind- and solar-powered sources of energy,” could cause “oil demand [to] begin to shrivel in the next 10 to 15 years.”

As for Arbib, he has two brands he likes to name-check for people who don’t think the transition can happen that fast. Nokia and Kodak are “examples” he says, “of companies that have fallen by the wayside, taken by surprise by the scale and speed of these disruptions.”