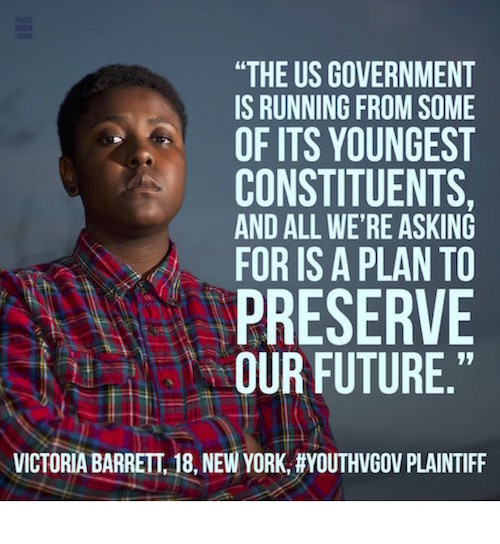 The Trump White House notched another courtroom defeat late last week when U.S. Judge Ann Aiken denied its request to dismiss Juliana v. United States, a landmark case by 21 youth plaintiffs aged nine to 20, before it can go to trial.

In a filing that Our Children’s Trust, the organization pursuing the case, described as “remarkable”, the administration had pressed Aiken to decide on the appeal by June 9. “The government’s belief that it is legally entitled to an immediate ruling on a motion it submitted three months ago is rather ironic given that it waited four months to file the request for interlocutory certification in the first place,” Aiken said.

“The more evidence we gather for our case, the more I realize how decisively we can win at trial,” said 20-year old youth plaintiff Alex Loznak. “It’s no wonder the Trump administration wants to avoid the trial by seeking an unwarranted, premature appeal. Today’s ruling brings us one step closer to trial and to winning our lawsuit.”

[To make a donation to support the case, you can reach Our Children’s Trust here—Ed.]

Donald Trump continued his practice last week of nominating individuals to government posts with records of sworn enmity to the agencies he suggests they run. This time, the big winner is Jeffrey B. Clark, BP’s attorney during its legal battles to avoid paying damages for the 2010 Deepwater Horizon oil blowout in the Gulf of Mexico, to lead all U.S. federal environmental litigation.

If Clark is confirmed as assistant attorney general for the Department of Justice’s Environment and Natural Resources Division, he will also be called on to defend the Environmental Protection Agency, whose authority to regulate greenhouse gases he has attacked in the past.

Clark has “a long history of opposing climate action for corporate and ideological clients,” the Natural Resources Defense Council’s David Doniger told InsideClimate News. “I would expect that history would require him to recuse himself from such cases as [that] over the Clean Power Plan, where he filed an amicus brief against the rule.”

Clark must be confirmed by the Senate before he can serve.

And if the United States released enough greenhouse gases over the next few years to tip the scales toward catastrophic climate change …would we know? Not if Trump’s somewhat sketchy budget draft is enacted as requested, Bloomberg reports.

“The government has two basic tools for tracking emissions,” the news agency writes. “The Trump administration is proposing to cut or wind down both of them.”

One of the tools is a national emissions inventory established under President George H.W. Bush that requires every facility that emits the equivalent of 25,000 tons or more of carbon dioxide per year to track those emissions annually and report them to the Environmental Protection Agency. Trump would slash the budget for operating the inventory by 86%. “It’s not clear how the EPA would be able to continue the inventory with that cut,” Bloomberg notes.

Trump’s backers, who include many climate science deniers, support the moves as eliminating what they sees as government waste. “This doesn’t necessarily need to be housed within the federal government,” Nick Loris, a research fellow for the climate-denying Heritage Foundation, told Bloomberg. “If the private sector wants to continue to pursue greenhouse gas monitoring, that’s fine.”

But Goldman warned that, “without such vital monitoring efforts, we can’t understand and prepare for climate change as well” as with the information it provides.

“As they say, you can’t manage what you don’t measure,” noted Janet McCabe, who ran the inventory program under President Barack Obama.

“The first step in any decent regulatory program is a requirement for monitoring,” agreed NRDC’s Doniger. “If you don’t know what’s there, it’s harder for the public or the regulators to do anything about it.”

“Whether the cuts happen,” Bloomberg notes, “will depend on Congress, and the degree to which Republicans share Trump’s priorities.” Other elements of the White House draft have been declared dead on arrival on Capitol Hill.

China Connects with California, U.S. Businesses Step Up to Deliver on Paris Targets