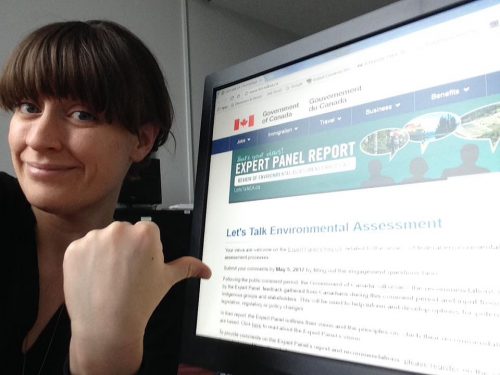 The Conservative Party of Canada voiced no objections when the chief of staff to Natural Resources Minister Jim Carr was a former oil industry executive. Now that the role is filled by Zoë Caron—who previously worked for the World Wildlife Fund and co-wrote a book about climate policy with Green MP Elizabeth May, before joining the Prime Minister’s Office as an advisor—the party is crying foul.

“How can anyone possibly trust the natural resources minister will champion the energy sector and get pipelines built when the forces of no are right at the top in his office?” an outraged Conservative deputy natural resources critic Shannon Stubbs asked the House of Commons on Monday.

According to iPolitics, the Alberta MP recalled Caron’s statement, before she served in government, that “’Canada’s decision to keep expanding and developing the tar sands is an example for other nations of what not to do.’” Objected Stubbs: “Now she is in charge of all political decisions in the minister’s office.”

Stubbs accused Carr’s chief of staff of being an “anti-energy activist,” inaccurately equating hydrocarbons with energy writ large. And iPolitics hinted at a more convincing explanation for Conservatives’ concern. Caron is likely to be engaged in two critical decisions pending on Carr’s desk: whether the National Energy Board should include downstream greenhouse gas emissions in its coming assessment of TransCanada Corporation’s Energy East pipeline, and the reform of the NEB itself.

As it happens, Carr was in China—where he is trying to sell Canadian oil and gas—when Stubbs posed her questions. Earlier in the day, his office announced that he had approved a 40-year LNG export licence  from the Woodfibre project in Squamish, B.C. Carr’s Parliamentary secretary responded to Stubbs by asserting that the Liberal “did in one year what the previous government could not do in a decade. We approved pipelines while at the same time protecting our oceans, pricing carbon pollution, and working with Indigenous peoples.”