As U.S. Walks Away from Paris, Canada is ‘Happy to Eat Its Cleantech Lunch’ 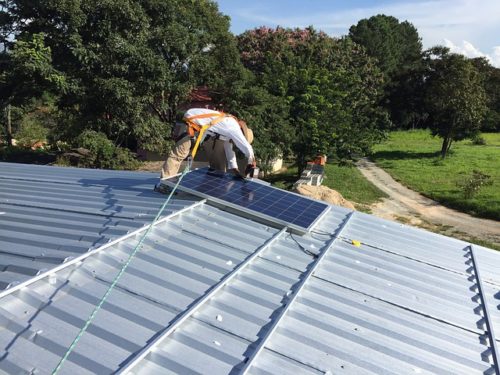 The impact of the United States’ historic retreat from the Paris climate agreement on global warming remains to be seen, but its implications for Canadian business are already crystal clear, Clean Energy Canada Policy Director Dan Woynillowicz argues in iPolitics: It’s a huge opportunity.

“The opportunity is perhaps best summed up by Canadian cleantech investor Tom Rand,” Woynillowicz writes. “‘If the U.S. wants to walk away from climate action, then Canada will be more than happy to eat its cleantech lunch.’”

Woynillowicz contrasts the enthusiasm among green businesses to the attitude of the Canadian “federal opposition, steadfastly opposed to putting a price on carbon pollution, [and which views] Trump’s Paris exit as one more excuse to pull back on Canadian efforts to address climate change.

“Concerns about reduced competitiveness can be legitimate,” the clean energy advocate concedes, “but they tend to be grossly exaggerated. After all, 95% of Canada’s economy has little to fear from pricing pollution—and could have much to gain. Governments also can design policy to help that remaining 5%—the emissions-intensive companies that compete internationally and are therefore trade-exposed.”

Woynillowicz notes that global installations of renewable power have outstripped those of fossil-fuelled generation in every year since 2012. More than US$2 trillion in investment “has led to a growing global work force that now employs nearly 10 million people.” Canadian companies selling a range of products and services from “green buildings and energy efficiency, [to] clean transportation, renewable power, energy storage and grid infrastructure” he writes, are now “poised to capitalize” on that emerging global market.

And “the opportunity for Canadian firms only increases as the U.S. retrenches, reducing support for American companies looking to export their clean energy solutions abroad.”

FOR THE WIN: Zero Emissions by 2060 is Doable, IEA Asserts