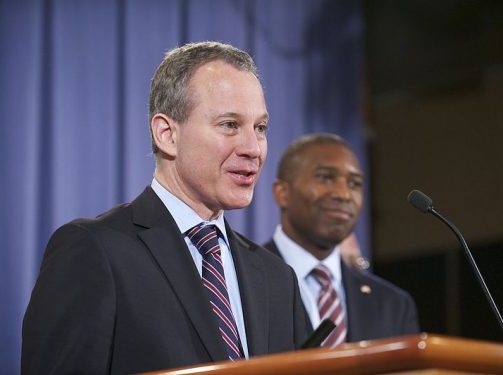 The existence of two sets of books, a public document for investors and a “secret” version for in-house use, suggests Exxon “may have misrepresented the financial risks posed to its business by climate change,” InsideClimate News reports. Tillerson, now Donald Trump’s secretary of state, was “specifically informed of, and approved of” the disconnect between the two sets of records, the document states.

The filing said the attorney general’s office “has uncovered significant evidence of potential materially false and misleading statements by Exxon about its application of a proxy cost” for carbon dioxide emissions, “suggesting that the exercise described to investors may be a sham.” Schneiderman based his filing on reports already supplied by Exxon, and is now asking for additional documentation to continue his investigation.

ICN explains that, in the absence of an actual carbon prices, companies can use a proxy cost of carbon as “an estimate of the penalties governments may impose in the future on greenhouse gases.” Schneiderman’s filing “described evidence showing that while Exxon had one set of estimates that it told investors about, it actually applied a lower proxy cost when it made investment decisions, with the effect of making its investments look more attractive.”

The filing cites correspondence between Exxon and an employee of Imperial Oil, its Canadian affiliate, who was evaluating a project in the tar sands/oil sands, where Exxon is the largest foreign operator. At that time, Exxon’s public reporting claimed a proxy carbon price of US$80 per ton. However, “Exxon apparently told [the employee] not to apply the costs contained in the company’s corporate directives, but instead to use the much lower levels of Alberta’s provincial carbon tax.”

At the higher proxy cost, the filing stated, “at least one substantial oil sands project may have projected a financial loss, rather than a profit, over the course of the project’s original timeline.”

Schneiderman asserted that Exxon was aware that this practice misled investors. “Exxon actually recognized that its secret, internal figures understated the degree to which Exxon was taking into account the risks of climate change regulations,” meaning the company was “not as conservative as its representations to investors suggested when applied to the vast majority of projects.”