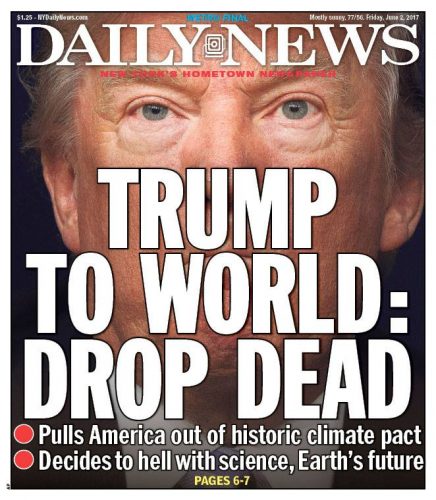 For all the advance dread it induced and the “injured morale” it produced, Donald Trump’s Paris decision last week has had an unexpected effect: It has galvanized support and determination for climate action as never before, Climate Action Network-Canada Executive Director Catherine Abreu argues in a Maclean’s Magazine opinion piece published Friday.

“No other moment in recent history has matched the signing of the Paris Agreement as an articulation of unprecedented global consensus on an issue of unprecedented urgency—until Thursday,” she writes. “In an unexpected twist, Trump’s move to withdraw the U.S. from the accord has resulted in the clearest and most coherent call for climate action from every corner of human civilization yet.”

Abreu recounts the torrent of support for Paris and the revulsion for Trump’s position that followed his Rose Garden appearance June 1, and inventories the new leadership coalitions that are forming to push Paris implementation forward. And she notes that, under the terms of the agreement itself, the U.S. won’t be able to complete its withdrawal until November 4, 2020—ironically, the day after the next U.S. election.

The bad news in that scenario is that Trump administration negotiators will have full access to Paris discussions, and full opportunity to try to disrupt the process from within. “However, the consensus-based nature of the UN process and loss of credibility the U.S. will experience thanks to this move will limit the impact of any bad behaviour,” Abreu writes.

Meanwhile, Trump’s decision to step away—combined with other countries’ loud assertion that the agreement is not open for renegotiation—means the Paris deal may have dodged a bullet. The months-long diplomatic effort to keep the U.S. in the fold led to some bizarre moments, with some of the key architects of the agreement saying any country could water down its Paris commitments if it wanted to.

Now, “rather than allowing the United States to lower its climate ambitions, it remains clear that the Paris Agreement sets a clear direction of travel: as climate pledges get more and more ambitious over time, we must eventually meet the scale of the challenge, without any backtracking by anybody,” Abreu writes.

In the U.S., futurist Alex Steffen says fossil investors were “super-clear” that the Paris agreement was their death knell. That makes Trump’s fossil-funded action “one big lurching grab by a bunch of carbon cronies, to get one last score before the whole carbon bubble crashes. It’s reckless and immoral. It will delay climate action, and thus do harm to billions of people. But at its core, it’s still just a con.”

“Trump trashing Paris will enrage and inspire a new, radically ambitious American climate movement,” Steffen predicts. “So don’t mourn Paris, ready yourself — gather your allies, ready your tools, hone your thinking. The most important political fight of your life has begun.”

Trump “has unleashed a number of forces that I don’t think he understands that ultimately are going to work against him,” agreed ex-Sanders campaign strategist Tad Devine, cited in a Washington Post article on the political opportunity Democrats see in the Paris withdrawal. “People are interpreting this not as my house is going to be flooded tomorrow, but our federal government is being run by people who don’t care about science.”