If Washington Doesn’t Lead on Climate, ‘People Will Rise Up’, Schwarzenegger Warns Trump 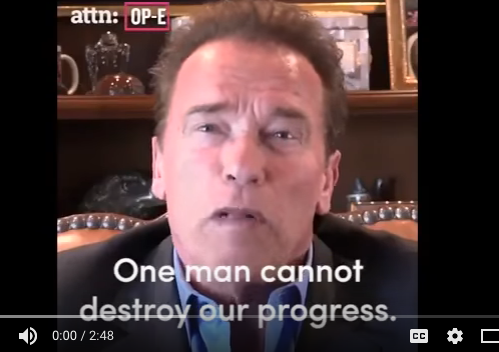 Former California governor Arnold Schwarzenegger is evoking his iconic movie role in The Terminator in a YouTube video responding to Donald Trump’s decision to pull the United States out of the Paris agreement.

“One man cannot destroy our progress. One man can’t stop our clean energy revolution. And one man can’t go back in time,” he deadpans. “Only I can do that.”

Schwarzenegger reminds Trump that “as a public servant, and especially as president, your first and most important responsibility is to protect the people.” Yet “200,000 people die every year in the United States from air pollution, and half of our rivers and streams are too polluted for our health. We can’t sit back and just do nothing while people are getting sick and dying. Especially when you know there’s another way.”

Schwarzenegger, who helped launch California’s low-carbon transition during his term as governor, notes that “no one remembers the people who told President Kennedy not to go to the moon. We remember the great leaders who don’t walk backwards into the past, but great leaders who charge forward into the future.”