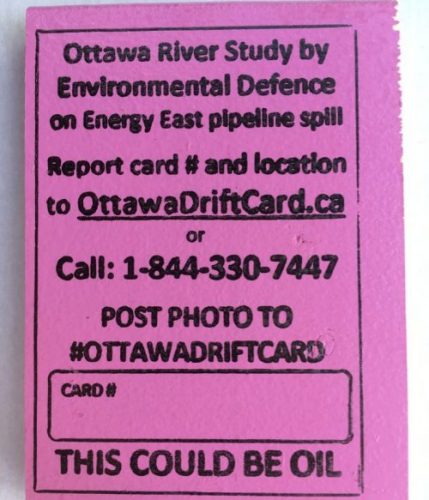 TransCanada Corporation has failed to explain how its controversial Energy East pipeline will safely cross key waterways along its proposed route, Environmental Defence and Équiterre charge in a new analysis issued earlier this week.

The two organizations say the assessment raises questions about whether the National Energy Board (NEB) can proceed with the relaunch of its regulatory review for the $16-billion fossil megaproject.

“TransCanada has a worrisome record of pipeline ruptures and it can’t even say how Energy East would cross two of Québec’s most important waterways,” said Équiterre Senior Director Steven Guilbeault. “There’s no way the NEB can start this review when TransCanada can’t even provide fundamental details about safeguarding our most precious resource—fresh water.”

“It’s alarming that crucial information is still missing on how and where Energy East would cross the Ottawa, Saint Lawrence, and Assiniboine Rivers,” agreed Patrick DeRochie, climate and energy program manager at Environmental Defence. “A spill into a river would be devastating, yet TransCanada can’t tell us how this mega-pipeline would cross three of Canada’s largest and most iconic rivers. Without this critical information, the pipeline application is not complete, and the new National Energy Board review panel must not even begin to assess this risky project.”

The critique “shows that TransCanada has failed to disclose the precise location and method for Energy East’s crossing of the Ottawa River and failed to complete essential feasibility studies for the pipeline’s crossing of the Saint Lawrence River, while omitting a critical recommendation in the French version of a key report,” the two organizations note in a release.

“A pipeline rupture in the fast-moving section of the Ottawa River would put the drinking water of downstream First Nations and communities—including Greater Montreal—at risk.”

The company “has also failed to undertake or make public any study of the impacts of Energy East’s proposed crossing of the Assiniboine River near Portage la Prairie, Manitoba,” the release notes.

“Energy East is all risk and no reward for Manitobans,” said Manitoba Energy Justice Coalition Campaigner Nathan Laser. “If TransCanada can’t even tell us how it would keep the Assiniboine safe from a pipeline spill, what does it mean for the thousands of other lakes, rivers, aquifers, and streams the pipeline would cross?”

Environmental Defence marked the report release by inviting supporters to adopt a drift card as a way of “taking part in research that TransCanada can’t be bothered to do for its own project.”

The drift card study “is fairly simple,” Environmental Defence National Program Manager Dale Marshall explained in an email. “We float wood drift cards in three of the major water systems the Energy East pipeline will intersect. These wood cards then drift along natural currents, just as spilled oil might. When someone finds the drift card, they log where and when it was found, and we combine this information over time to learn how an oil spill from Energy East might spread, and where oil might accumulate.”