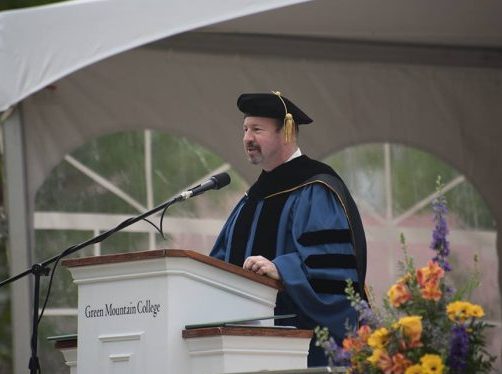 Getting involved in public discourse is the only way to counter an unprecedented assault on science and avert catastrophic climate change, renowned Penn State researcher Michael E. Mann told the graduating class at Vermont’s Green Mountain College in a commencement address last month.

“Here we are, at a crossroads,” Mann said. “Evidence now shows us that we face a stark choice, between a future with a little more climate change that we will still have to adapt to and cope with, and one with catastrophic climate change that will threaten the future of life as we know it.”

But “never before have we witnessed science under the kind of assault it is being subject to right now in this country. Nor have we witnessed an assault on the environment like the one we are witnessing in the current political atmosphere.”

Having chronicled a spectacular history of sustainability progress on the part of the college and its graduates, Mann urged Class of 17 to “become involved. There are so many ways to speak out and to influence the dialogue. So many ways we can engage constructively with governmental, civic, and corporate institutions in the realms of education, public policy, and industry.”

And now more than ever, “those of us who care about science and the role that science plays in our larger public discourse and those who care about environmental stewardship and a sustainable path forward must now make our voices heard.”