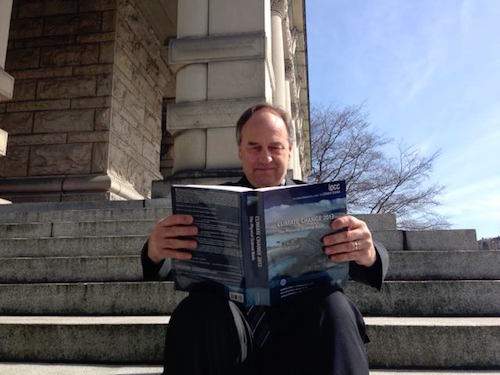 An all-out push to cancel the Trans Mountain pipeline expansion and a $5-per-tonne annual increase in provincial carbon tax are among the early policy moves British Columbians can expect as a result of Monday’s landmark agreement that will see Andrew Weaver’s Green Party support the New Democrats in a minority government.

The early reaction followed the Monday afternoon announcement that the B.C. Greens will support an NDP minority government when the provincial legislature convenes for the first time after an indecisive May 9 vote. The decision sent shockwaves from Victoria to Edmonton, Ottawa, and Toronto—where it arrived on the eve of Texas-based Kinder Morgan’s last-ditch effort to finance Trans Mountain through a public share offering.

The election left the governing neo-conservative, strongly pro-fossil Liberals under Premier Christy Clark with 43 seats in the next B.C. legislature, one short of a majority, and the NDP with 41. The Greens won three seats to hold the balance of power. That result set off 20 days of uncertainty, speculation, and inter-party negotiations leading up to Monday’s announcement by Weaver and NDP leader John Horgan that the Green caucus would backstop an NDP minority government in matters of confidence that come to a vote in the legislature.

“I am very excited about the prospects of delivering to the people of British Columbia what they voted for on May 9, and that was change,” Horgan told reporters after making the announcement. “We are going to be able to give that change as a result of the agreement reached between the B.C. Green caucus and the B.C. NDP caucus.”

The announcement put to rest weeks of suspense for British Columbians, some of whom had fretted that Weaver might throw his support to the governing Liberals.

Pembina Institute’s B.C. Director, Josha MacNab, welcomed the agreement as “encouraging news for British Columbians who want to see a prosperous economy, thriving communities, and healthy families in tomorrow’s B.C.” MacNab said that “raising the level of ambition of climate action in B.C. is imperative for the province to secure economic prosperity, protect our families and communities, and do its part in reducing Canada’s carbon pollution.”

The governing agreement between the two parties, “now signed by a majority of MLAs, declares they will use all legal and political tools available to stop Kinder Morgan’s crude pipeline and oil tanker proposal—and ban corrupting Big Money from politics once and for all,” enthused Dogwood Initiative Strategy Director Will Horter, writing on the 18th anniversary of the day he joined Dogwood as its first staff member.

“It also lays the groundwork for B.C. to transition to a more just, sustainable 21st-century economy, move forward with Indigenous reconciliation—and electoral reform. And given Andrew Weaver’s words today about reestablishing B.C. as a climate leader, I can’t see the U.S. thermal coal industry getting a free ride through our province for much longer.”

The agreement does not constitute a coalition. No Green MLAs would join an NDP cabinet. “We specifically did not ask for there to be a coalition,” Weaver told reporters. “We wanted to maintain a minority situation to show British Columbians that it can work.” In an email to supporters, Weaver added that “we retain our right as a party to evaluate all policy and legislation on an issue-by-issue basis, allowing us to make evidence-based decisions, as always.”

Perhaps optimistically, the IPCC climate scientist-turned-politician said his party’s agreement with the NDP “will last the full four-year term, to create a stable government for all British Columbians.” In fact, that government does not yet exist, and will not be formed for at least a few weeks.

Constitutional process allows still-Premier Clark to call the legislature together and present a Throne Speech, even if it may be doomed to fall to a non-confidence motion that would in turn give Lieutenant Governor Judith Guichon the opportunity to call on Horgan’s NDP to form a government with Green support.

After initially reserving her response to her rivals’ announcement, Clark elected that course on Tuesday, saying she intended to form a government “some time in June,” according to CKNW radio. “Clark admits, though, that the Liberals would likely fail a vote of confidence and she could become leader of the Opposition,” the news station added.

In announcing his deal with New Democrats, Weaver promised supporters that “B.C. Green policy areas have been incorporated into the agreement and were key for our support.” As details of those areas began to emerge Tuesday, stopping the Trans Mountain expansion topped the two parties’ agreed to-do list.

“Under the agreement, the expansion of the Kinder Morgan [pipeline] will be stopped, as will the ‘seven-fold’ increase of tanker traffic on the coast, and the transportation of raw bitumen in the province,” Victoria’s CHEK TV reported. The parties said they would “employ every tool available to the new government” to halt the project.

Other terms of the agreement stipulate that B.C.’s carbon tax will rise “by $5 per tonne per year, starting on April 1, 2018,” CHEK added, with rebates for low-income households. “The tax would [also] be expanded to fugitive emissions and slash pile burning.” A referendum on proportional representation and a ban on non-resident, corporate, and union donations to political parties are also on the alliance’s agreed agenda.

The first indication of how a reversal in British Columbia’s support might impact the U.S. pipeliner came on Tuesday, when a freshly-formed Kinder Morgan subsidiary issued its first shares on the Toronto Stock Exchange.

In what has been described as a last-ditch resort to crowdfunding after failing to secure conventional financing for its C$7.4-billion expansion, the struggling American company hopes to raise $1.75 billion from Canadian investors in order to start work. According to Bloomberg, “Kinder Morgan Canada [had] originally priced the shares at between $19 and $22 before scaling back to $17 last week.”

Only to find, apparently, they are not worth even that. The equities’ value tumbled by 7% below their $17 issue price within minutes of their first trade, Bloomberg reported. The stock later recovered somewhat to end the day at slightly above $16. Shares in parent Kinder Morgan Inc. also dropped during the day on the NYSE.

As U.S. outlet FoxBusiness news read it, the NDP-Green alliance was “a setback” for Kinder Morgan as well as “a blow” to the entire Canadian energy industry [Ed: which Fox appeared to confuse with its fossil hydrocarbon sector]. The company’s project is already beset by 19 different legal challenges, and has yet to secure all the permits it needs for specific parts of its proposed pipeline route (which deviates materially from that of the half-century-old line it is replacing).

“The decision we took on the Trans Mountain pipeline was based on facts [and] evidence, on what is in the best interest of Canadians,” Trudeau told reporters yesterday, following a meeting with Italian Prime Minister Paolo Gentiloni in Rome. “Regardless of a change in government, in British Columbia or anywhere, the facts and evidence do not change. We stand by those choices.”

“As far as I’m concerned, the federal government has the authority to approve pipelines,” Hoffman said in Edmonton. “They’ve made that decision and our pipeline is moving forward.”

Nonetheless, Canada’s Business News Network observed that “while there is some dispute over whether British Columbia can actually formally block a pipeline project, it can raise multiple hurdles, like denying local construction permits that could effectively make it impossible to build.” The Tyee headlined the “three ways B.C. could stop Kinder Morgan’s Trans Mountain pipeline plan” beginning with reviving the full environmental review that Clark’s government declined to perform.

If the NDP-Green alliance does lead to a government in Victoria, other provincial energy priorities are also in question, though they may strain the congeniality of the new non-coalition. Horgan must answer to supporters in the unionized construction trades; Weaver’s base is strongly environmental. Their interests may conflict on other Clark-backed initiatives. Those include her courtship of a liquefied natural gas export capability against strong Indigenous and environmental opposition, and the much-criticized construction of a hugely expensive, likely redundant third hydroelectricity generating reservoir at Site C on the Peace River. That project, the two parties agreed, will be referred to the BC Utilities Commission for a review of its economic viability and consequences.

Both projects, along with the Kinder Morgan pipeline expansion, were approved by Trudeau’s Liberals in Ottawa, where Green Party MP Elizabeth May drew a lesson from the events in B.C. for his government, as well. May, who represents a riding in B.C.’s Gulf Islands, warned that the federal government will now have to take British Columbians’ environmental concerns more seriously than it has in the past.

Trump's promises on coal turn to dust and ashes