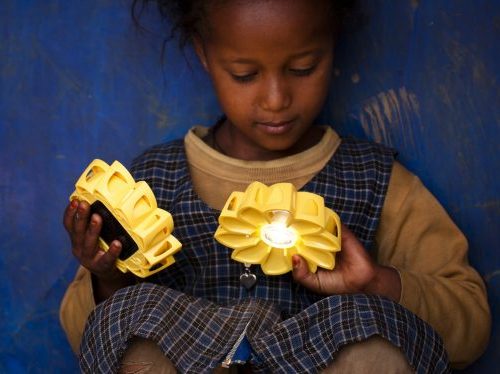 The world’s cheapest solar light, co-developed by UK-based SolarAid and Chinese solar manufacturer Yingli and delivered in Africa for £3.85 per unit, is producing £145 in local benefits.

Kerosene lamps are the main source of light for 600 million people in Africa with no access to the grid or other electricity sources. But now, there’s an alternative. “The SM100 was trialed with 9,000 families in three African countries, Malawi, Uganda, and Zambia, and the new light is now on sale,” BBC News reports. “The hand-sized lamp runs for eight hours when fully charged. As well as a stand, it has strap slots so it can be used as a head torch or tied to a bike.”

The light was designed by Manchester-based Inventid. “Kerosene keeps families locked in a cycle of extreme poverty, with almost one-quarter of their monthly income spent burning the fuel,” explained co-founder Henry James. “To break this cycle, we worked with Solar Aid, the UK’s leading solar charity, to design a light that the poorest families could afford. This meant designing a light that could retail for $5 in Africa.”

The scheme creates “both jobs and big savings on oil no longer needed for burning in kerosene lamps,” writes SolarAid Founding Director Jeremy Leggett. “We further know what that gets spent on…and food and seeds are high on the list. This is a great way to help people help themselves while famine stalks the continent. We also save a tonne of carbon dioxide emissions per kerosene lamp replaced.