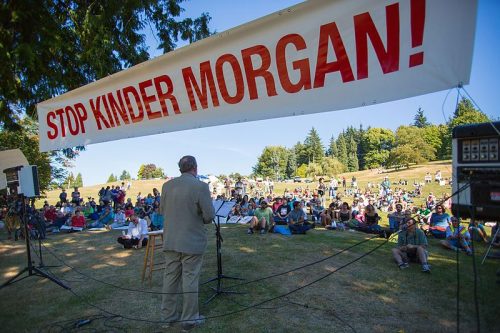 After essentially resorting to crowdfunding to pay for the controversial Trans Mountain pipeline expansion, Kinder Morgan issued a 215-page final prospectus last week for its $1.75-billion public share offering that seems to obliterate the recent spin for the project from CEO Ian Anderson.

“Our approvals are in hand and we are now ready to commence construction activities this fall,” Anderson said in the release announcing the IPO. But after reviewing the prospectus, “all the Texas pipeline barons can hope is that investors don’t read the fine print,” concludes the Dogwood Initiative’s Kai Nagata.

“An investment in Restricted Voting Shares should only be made by persons who can afford a significant or total loss of their investment,” that fine print acknowledges.

“It’s a rare dose of honesty from a company with a history of bending the truth,” Nagata writes. “A mandatory risk analysis accompanying the share offering makes clear how difficult it will be to start construction. Provincial politics, lawsuits, blockades by First Nations—any one of these could kill the Trans Mountain pipeline project, the company admits.”

In his own 2,225-word summary of Kinder’s long-form prospectus, Nagata points to five big pitfalls for potential investors—all quoted in the company’s own legal language, any one of which would be enough to sink the project.

First, the prospectus acknowledges that “the development and construction of the Trans Mountain Expansion Project and other major expansion projects, are subject to significant risk and, should any number of risks arise, such projects may be inhibited, delayed or stopped altogether.” The list of risks is exhaustive, from government regulatory approvals and permitting to land agreements, from public opposition and blockades to cost increases.

The prospectus even acknowledges the risk of “inclement weather or significant weather-related events (including storms and rising sea levels potentially resulting from climate change)”, even after Anderson contended late last year that he was “not smart enough” to comment on how much human activity influences atmospheric warming.

The prospectus acknowledges the 19 lawsuits arrayed against the project, and the likelihood that landowners are likely to stand their ground when Kinder Morgan arrives to expropriate their homes, leading to delays and cost overruns for the project.

And that’s just the first of five risk categories. Nagata goes into detail on the company’s disclosure related to increasing debt, the “failure by the Business to resolve issues relating to Aboriginal rights and title and the Crown’s duty to consult”, changes in government, and “significant operational risks, including those relating to the breakdown or failure of equipment, pipelines and facilities; releases and spills; operational disruptions or service interruptions; and catastrophic events.” That last, very scary point “confirms everything intervenors tried to raise during the biased NEB review” of the project, Nagata notes.

“Kinder Morgan tried to work a deal with shippers and private equity firms, to no avail,” he recounts. “It then sought to convince a pension fund or three to sink their pensioners’ hard-earned retirement funds into the $7.4-billion project, but that didn’t work, either.”

So now, “for the low, low price of $17 per share, you can own a piece of Canadian history.” The problem, in Ashworth’s view, is that “Kinder Morgan is passing the buck,” asking investors to buy into the risk of its own severe indebtedness and the political transformations now taking shape in British Columbia.

The fossil-friendly Financial Post is less openly hostile to the pipeline, but still cites a pulse-taking report by Wells Fargo Securities, an investment firm with no direct stake in the project. While “a majority of U.S. investors (are) more optimistic on the prospects for TMX,” their Canadian counterparts see B.C.’s minority government “as negative for TMX”. They believe “activist, environmental, and certain First Nations opposition will be strong, and they see significant headline risk over the next two to three years, which will impact the trading of the stock.”

While Wells Fargo gave the project a “net positive” assessment overall, the analysts asked: “Do I want to deal with the volatility along the way?”

Dogwood’s Nagata concludes his post with a reminder from Grand Chief Stewart Phillip, president of the Union of B.C. Indian Chiefs, who noted in a release that Kinder “was founded from the ashes and rubble of Enron, a company synonymous with scandal, corporate fraud, and bankruptcy.” Now, “these same reckless cowboys are trying to convince gullible investors to plow cash into a pipeline they know will never be built.”

Crowdfunding to pay for KMC ? What planet are you guys from? Kindly explain.