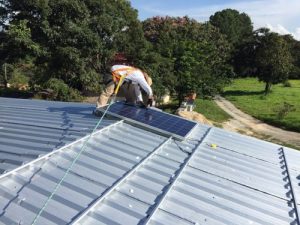 The International Renewable Energy Agency reported this week that renewable energy employed 9.8 million people worldwide in 2016, but the National Observer spotted the real lead in the story—IRENA’s blockbuster projection that renewables employment will hit 24 million by 2030.

“Many job opportunities will be created along the different segments of the value chain, with increasing requirements for individuals with diverse skill sets and talents,” the report stated. “Significant efforts in training and education (are) needed to provide the labour market with the required skills.”

Solar photovoltaics led the jobs parade last year with 3.1 million employed, followed by liquid biofuels with 1.7 million, large hydro with 1.5 million, wind at 1.15 million, solar heating and cooling with 828,000, and solid biomass with 723,000. The overall increase of about 1.1% “would have been higher were it not for losses in such markets as Japan and the European Union,” the Observer notes.

In an Observer interview last week, IRENA Director General Adnan Amin cited Vancouver as an example of a city where policies and regulations are driving a low-carbon shift.

“When cities like Vancouver, or much bigger cities than Vancouver, start to incentivize investments in clean energy, start to demand the procurement of renewable energy in their operations, start to create regulated frameworks for mobility that becomes cleaner for electric transportation, for energy efficiency in buildings, that starts to send messages to the market,” Amin said. “Once they accumulate, (they) become real drivers of investment and the direction of the energy transition.”