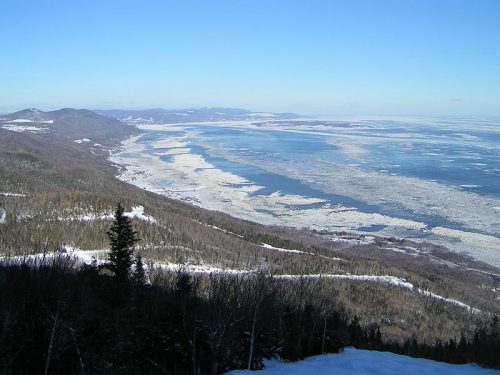 Over the last several years, TransCanada has had permission to conduct seismic tests and drilling in the St. Lawrence and Batiscan rivers, and on the bank of the Rivière du Nord in Quebec’s Laurentides region, to come up with a plan for running the pipeline across key bodies of water. But “in all those cases,” writes reporter Alexandre Shields [original in French], the work has been done in wetlands and waterways, in ecosystems that could shelter important biodiversity, including species that are endangered or at risk.”

The access request to the provincial ministry of sustainable development, environment, and climate change was based on a map that showed species at risk along the route. Le Devoir says the map was withdrawn, and replaced with a less precise version, after the ministry received the request.

Then the ministry passed the request on to TransCanada, the paper reports, as required under provincial rules. The company refused to divulge much of the available documentation, citing commercial confidentiality.

As a result, “it’s impossible to know whether TransCanada’s work is having any impact on threatened or endangered species, particularly wildlife,” Shields writes. “Even though it was the presence of an endangered species, the St. Lawrence beluga, that led to an environmental outcry over the company’s initial activity at Cacouna.” That controversy spelled the end of TransCanada’s plans for a marine port in Quebec.