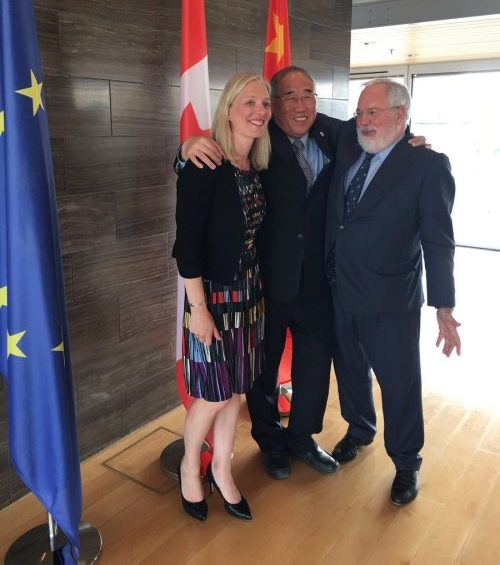 Environment ministers from Canada, China, and the European Union met yesterday in Berlin, and will convene other countries for a wider ministerial dialogue in September, to finalize a plan to sustain momentum on the Paris agreement, EU Climate and Energy Commissioner Miguel Arias Cañete told Bloomberg in an email earlier this week.

“The collaboration between the three countries is another sign that Trump, and the U.S., will become isolated from the rest of the world,” Bloomberg reports.

“We think that China, Canada and the EU are in a good position to bring together other countries at the ministerial level to have high-level discussions about how we’re going to move forward on the Paris agreement,” McKenna said. Paris “was a signal to the market, and now it’s about how to take advantage of this opportunity and how we make sure that every country is part of it.”

“We are often asked about our position when looking at the U.S. uncertainty,” Xie added. “The Paris agreement is a hard-won achievement, and all signatories should stick to it instead of walking away. China will stick to its word.”

German Chancellor Angela Merkel, whose country will host COP 23 in Bonn this fall, described the climate challenge as “something that concerns us all”, calling on delegates to the Petersberg Climate Dialog to “uphold the spirit of Paris”. And in a May 5 letter to U.S. EPA Administrator Scott Pruitt ahead of the G7 summit in Sicily, Merkel’s environment minister, Barbara Hendricks, warned that U.S. withdrawal from Paris “would cause lasting damage to the long-standing mutual trust and close cooperation between our two countries, and between the U.S. and other countries in Europe and elsewhere.”

David Waskow, international climate director at the World Resources Institute, said the trilateral initiative is “emblematic of the kind of distributed leadership we’re seeing, with a diversity of countries putting their shoulders to the wheel on climate.” The commitment “ranges from major emitters to many of the most vulnerable, and many in between,” he added.

In a series of draft reports leading up to its own annual summit, meanwhile, the North Atlantic Treaty Organization (NATO) expressed serious concern about a U.S. pullout from the Paris deal.

“The United States played a leading role in pushing for the Paris agreement, but there are now signs that it may reject its structures and even the science underlying it. This would represent a serious setback,” said one draft from the NATO Parliamentary Assembly. “International action becomes very difficult without U.S. participation, and there needs to be a dialogue to keep the United States within the reigning political and scientific consensus.”