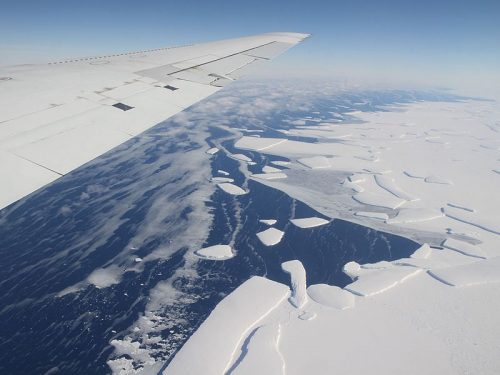 A team of Columbia University scientists, accompanied most recently by four journalists from the New York Times, has been scrambling to gather precise data on one of the most daunting climate impact scenarios: The fear that miles of ice collapsing into the sea presage the loss of the Antarctic ice sheet.

“A rapid disintegration of Antarctica might, in the worst case, cause the sea to rise so fast that tens of millions of coastal refugees would have to flee inland, potentially straining societies to the breaking point,” the Times reports, in the first of a three-part series. “Climate scientists used to regard that scenario as fit only for Hollywood disaster scripts. But these days, they cannot rule it out with any great confidence.”

The team led by Columbia engineer Nicholas Frearson has been mapping the scope and depth of the Ross Ice Shelf, hoping to verify or moderate projections that Antarctic ice loss could raise ocean levels by six feet or more by 2100—double the maximum that the Intergovernmental Panel on Climate Change was anticipating just four years ago.

The problem so far is that the available ice loss models are preliminary and crude. So “American and British scientific agencies are joining forces to get better measurements in the main trouble spots. The effort could cost more than $25 million and might not produce clearer answers about the fate of the ice until the early 2020s,” the Times notes. The analysis matters because “political leaders—and cities already feeling the effects of a rising sea—need clearer forecasts about the consequences of emissions.”

Even as the Columbia team works to understand the tipping point at which Antarctica’s disintegration is irreversible—or to determine whether global warming has already passed that point—a paper last week in the journal Current Biology is pointing to “striking evidence of climate change in the coldest and most remote parts of the planet,” the Washington Post reports.

“Amid the warming of the last 50 years, the scientists found two different species of mosses undergoing the equivalent of growth spurts, with mosses that once grew less than a millimetre per year now growing over three millimetres per year on average.”

Soil samples of the “remarkably well-preserved” mosses point to “dramatic changes in growth patterns going back 150 years,” the paper notes.

“People will think of Antarctica quite rightly as a very icy place, but our work shows that parts of it are green, and are likely to be getting greener,” said lead author Matthew Amesbury of the University of Exeter. “Even these relatively remote ecosystems that people might think are relatively untouched by humankind are showing the effects of human-induced climate change.”

That comment echoed Nicholas Frearson’s comment to the New York Times, during the Ross Ice Shelf overflight: “We are 9,000 miles from New York. But we are connected by the ocean.”

Reinforcing the Columbia team’s sense of urgency to bring useful data back to decision-makers, a study published last week in the journal Scientific Reports confirms that “small but inevitable rises in sea level will double the frequency of severe coastal flooding in most of the world, with dire consequences for major cities that sit on coastlines,” The Guardian reports. “The most vulnerable places, including large cities in Brazil and Ivory Coast, and small Pacific islands, are expected to experience the doubling within a decade.”

“It is pretty much inevitable that we are going to see increased frequency of extreme water levels,” said lead researcher Sean Vitousek of the University of Illinois at Chicago.

“The steady rise in sea level is unlikely to cause flooding directly, as coastline developments are designed to withstand the larger ebb and flow of the tides,” The Guardian explains. “But the rising level gives a higher starting point for the storm surges and big waves that can overwhelm coastal defences.”

“This study shows how even small changes in mean sea level can significantly increase the frequencies with which critical thresholds are exceeded,” said coastal risk specialist Thomas Wahl of the University of Central Florida.