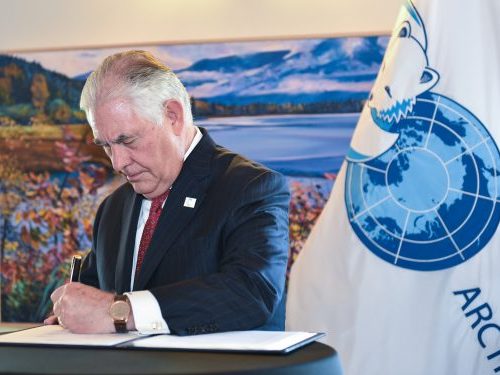 In an early hint at the behaviour international negotiators might expect if the United States stays in the Paris agreement, a leaked draft obtained by InsideClimate News shows that the Trump administration significantly weakened climate language in the closing declaration of the Arctic Council meeting in Fairbanks earlier this month.

The initial readout from the meeting had indicated a cooperative negotiating stance from the U.S., with Canadian Foreign Affairs Minister Chrystia Freeland praising Tillerson as a “good partner” on climate policy. “I’m pleased that we got to a good place thanks to the partnership of all the Arctic Council members, very much including the United States, and very much including Secretary Tillerson,” she said at the time.

But the leak to the Pulitzer Prize-winning ICN showed six last-minute changes to the declaration, all demanded by the U.S., all designed to weaken the language on climate change. The effect, said one Arctic Council delegate, was that the U.S. “just dropped a bomb on a multilateral forum at the last minute. I don’t think any of us were mentally prepared that we were now going to be in a make it or break it situation.”

Delegates “had planned to meet for an hour on May 10 to finalize grammar and other trivial changes,” writes ICN’s Sabrina Shankman. “But on May 9, the negotiators received a new version of the declaration from the United States that asked for six changes—all downplaying climate risks, the need for the Paris treaty or ambitious renewable energy goals. Negotiators spent a long morning huddled around a table, working line-by-line through the document projected on a screen. The other nations challenged the U.S. on every point, often joined by the Indigenous groups.”

That experience “can be seen as a test case for what we can expect at larger, more consequential meetings of international organizations dealing with global warming issues,” Shankman notes.

“Ninety-nine point ninety-nine percent of the people who read the declaration will not have the benefit of hindsight and will think it’s pretty good, and we agree with that,” Aleut International Association representative Jim Gamble told ICN. “There’s an effort to move the climate agreement and sustainable development goals forward. But for those of us who are involved in the whole negotiation, we know at various times there was stronger language.”

The last of those revisions “was probably the biggest change in the document,” one meeting participant told ICN.

So far, the U.S. under Trump is receiving props for playing a constructive role in international climate negotiations, most recently at mid-year negotiations in Bonn that concluded last week. Although the U.S. delegation was down to 15 members, compared to 40 at the same meetings last year, “they’re not hampering anything. They’re sending the same people. The only difference is that they don’t have any guidance” on future policies, said Seychelles delegate Ronald Jumeau told Reuters. “And no one here is berating the Americans.”