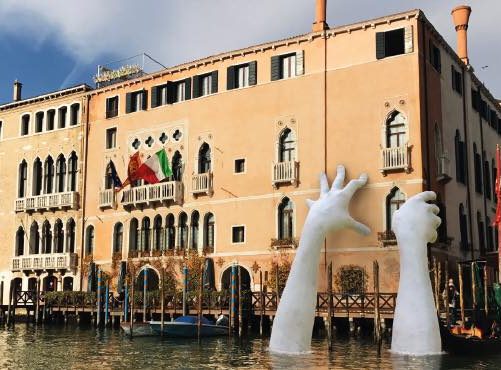 Italian sculptor Lorenzo Quinn has unveiled a massive sculpture—two 5,000-pound hands emerging from Venice’s Grand Canal to grasp the walls of the famous Ca’Sagredo Hotel—to shine a light on the impacts of climate change.

The sculpture represents the “delicate existence of humans and society against the force of nature in today’s climate of change,” according to a release from the Halcyon Gallery in London, UK, which represents Quinn.

“Reflecting on the two sides of human nature, the creative and the destructive, as well as the capacity for humans to act and make an impact on history and the environment, Quinn addresses the ability for humans to make a change and rebalance the world around them—environmentally, economically, socially.”

The piece will be in display until November 26.

“Venice and its Lagoon were added to the list of UNESCO World Heritage Sites in 1987,” The Weather Network reports. “According to Mashable, Quinn may take his sculpture on tour, as he has received several requests to install it at other UNESCO sites.” (h/t to The Energy Mix subscriber Elizabeth Henderson for pointing us to this story)