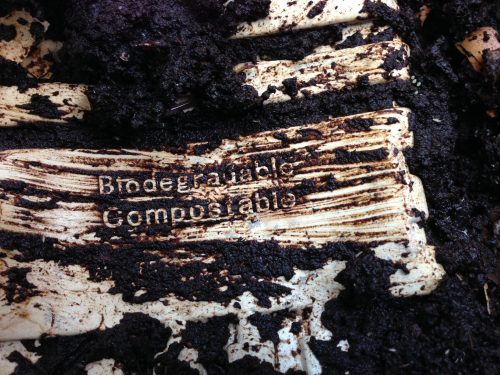 Petrochemicals and plastics feedstocks are a kind of last stand for fossil producers, an end use the industry’s defenders claim will sustain demand for hydrocarbons for the foreseeable future. But that defence may be losing its footing, as a new generation of replacement biomaterials becomes available.

After more than a decade of development in various private R&D labs, GreenBiz writes, companies employing organic chemists are producing “durable, plastic-like industrial materials without petroleum-based polymers.” Those raw materials are being turned into “grocery bags, cups, forks, and spoons that act like plastic but are biodegradable and compostable, [and] even soft, washable fabrics that seem like nylon but are made of plants and biodegrade.”

Citing U.S. Department of Agriculture figures, GreenBiz reports that some 2,700 ‘bio-based’ products are already on the American market, “saving 6.8 million barrels of oil from use and avoiding 10 million tonnes of carbon dioxide emissions.”

The materials match petroleum-based ones in performance. Adidas plans to release a sneaker line later this year made—with a few intermediate steps—from corn stalks. The shoes will be as tough as the company’s traditional footwear, said Bill McInnis, head of Reebok Future. “When the product hits the market, we know our consumers don’t want to sacrifice how sneakers look and perform.”

Eastman Chemical is extracting a cellulosic yarn it has trade-named Naia from wood that has been grown, GreenBiz states, in “sustainably managed and certified forests.” The word play is on “Gaia” and “nylon”, the petroleum-derived fibre whose characteristics Eastman claims it replicates “as a flexible, satiny-feeling, and washable fabric [that] is also ‘breathable’”.

The OECD has estimated that a global bio-economy based on organic carbohydrates instead of petroleum hydrocarbons could be worth US$2.6 to $5.8 trillion per year by 2025-2030.

Meanwhile, GreenBiz notes, “manufacturers say they are introducing these products in response to market demand,” meaning that consumers can expect “a flurry of bio-based, compostable and biodegradable products” in the near future.

Sustaining hope for wisdom to prevail.