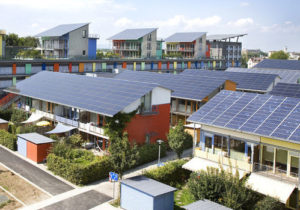 Ontario is about a month away from announcing a new agency that will take a “much deeper look at retrofitting households,” while positioning Bay Street as a leader in green technology investment, the province’s special advisor for climate change, John Godfrey, said last Friday.

“We are establishing an agency to help consumers and businesses find and finance low-carbon technologies to reduce greenhouse gas emissions,”  Ministry spokesperson Gary Wheeler confirmed in a Monday afternoon email to The Energy Mix.

“It will be a one-stop shop to improve consumer access to existing energy efficiency programs and make it easier to adopt new low-carbon technology. This will ensure cap and trade proceeds are invested in a transparent way into climate actions that help households and businesses reduce their use of fossil fuels and adopt low-carbon technology.”

While climate change mitigation and adaptation will be focal points for the new agency, Godfrey told participants at a provincial climate symposium, the biggest challenge is to tap the economic opportunity in a new industrial revolution. That means the most interesting question is “how you transform the economy, and how you use some of the money from the greenhouse gas investment fund to help that process.”

In his remarks, Godfrey noted that Ontario’s 4.3 million homes are currently renewed at a rate of about 1% per year, and pointed to the fragmentation in efforts by different provincial and local bodies to encourage faster, deeper retrofits.

“If a household is confronted with a raft of programs dealing with different pieces [of the retrofit puzzle], where’s the coherence?” he asked. The province’s solution will take the form of a “concierge service for the average householder that allows you to talk to a real, live person…to make it simple on the phone and in person.” The program will coordinate existing funding programs from the Independent Electricity System Operator and local electricity and gas distributors, add new incentives, “explain what can be done, and then make it easy to finance,” in a way that “will allow you ultimately to do deeper retrofits.”

Godfrey said the new initiative, modelled in part on successful energy retrofit initiatives in Nova Scotia and the United States, will address “the human part. That’s what’s been missing in making things coherent from a consumer customer point of view.” He also recalled Ontario’s own success a quarter-century ago when the provincial utility at the time, Ontario Hydro, tested a community-based retrofit program in Espanola, a town of 5,000 west of Sudbury.

“They involved the entire community,” Godfrey said. “They involved schools. They had a contest for the logo. They had outreach programs. And within two years, they had [energy-]audited 87% of the buildings, including commercial buildings. It was a tremendous success. We’re learning some of those lessons and looking at how other jurisdictions have done it.”

Godfrey also pointed to the “more complex, more challenging, more exciting” opportunity in what he said would be the first industrial revolution ever driven by public policy.

“We have tremendous resources here in the province, companies on the verge of doing great things, but we don’t have a financial infrastructure to support them,” he said. One goal of Ontario’s climate action plan is to “address the gaps that occur when companies get to be 10 or 15 years old and then they stall out, or they get bought out by somebody else,” largely because green technologies are a more complex, longer-term investment than “bits and bytes”.

Ontario has promise as a green investment hub because “we’ve got tonnes of money in the province,” he added. But major institutions like pension funds “are not going to be financing cleantech when there’s easier stuff to be done with shorter payoff. Unless we can figure it out as we did with the mining sector, which is equally difficult, challenging, long-term, full of risk,” but still gets a large share of its financing through Ontario investors.

“We need 75% of the world’s cleantech financing passing through Bay Street,” Godfrey declared. But so far “we aren’t anywhere near that.”