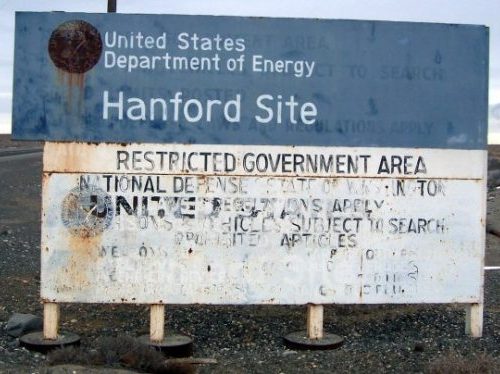 For decades, the Hanford Nuclear Reservation has been seen as something of a poster child for the public safety and long-term waste disposal issues facing the civilian nuclear industry.

Randy Bradbury, a spokesman for the Washington State Department of Ecology, said the collapse occurred in one of two tunnels under a closed site near the middle of the sprawling Hanford complex—half the size of Rhode Island—which was once part of America’s nuclear weapons production program. For decades, the facility in the bare, rolling hills of southeastern Washington “made plutonium for nuclear weapons,” Bloomberg reports. It now holds “the largest depository of radioactive defence waste” in the United States, including “about 56 million gallons of radioactive waste, most of it in 177 underground tanks.”

But more was apparently stored in rail cars on tracks beneath the mothballed PUREX weapons production plant. “In the past,” Bradbury told the outlet, “rail cars full of radioactive waste were driven into the tunnels and then buried there.”

No workers were in the tunnel when it collapsed on the trainload of waste, and “officials detected no release of radiation,” Bloomberg notes. However, CBC News reports that Hanford’s locked-down personnel had received a message from management instructing them to “secure ventilation in your building” and “refrain from eating or drinking.”