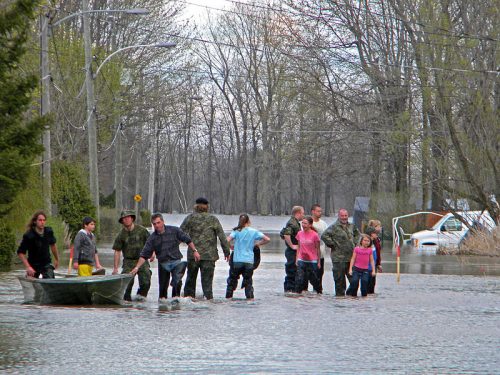 As the raging Ottawa River peaked at record heights over the weekend before beginning to recede, residents of eastern Ontario and the Montreal region still faced potentially weeks of high water and a new reality: Like last year’s mega-fire in Alberta’s tar sands/oil sands region, this spring’s flooding is an example of a new class of “climate change emergencies.”

Both the Fort McMurray fire and the last week of flooding were made much more likely by climate change. More intense precipitation is one of the clearest fingerprints of a warming atmosphere.

“We’re getting a lot more extreme weather events, whether that be torrential rains leading to flooding, or really hot and dry temperatures,” of the sort that preceded 2016’s inferno in Alberta, University of Ottawa geographer Paul Beckwith told the National Observer. “These events are much more severe, much more intense, they last longer, they’re happening more frequently, and they’re happening in areas where they didn’t happen before.”

One reason is simple physics: Warm air can hold more water than cold (the reason weathercasters talk about relative humidity, a measure of how much water the air can hold at its current temperature). Studies observe that the amount of water vapour in the global atmosphere has increased by about 4% since the advent of global warming.

“It’s a very direct connection,” said Katharine Hayhoe, the Canadian co-director of the Climate Science Center at Texas Tech University. “The warmer it is, the faster water evaporates, especially out of the ocean, the more water vapour there is for any given storm.”

In the U.S. region adjacent to the Ottawa Valley/Montreal area, the number of intense precipitation events leapt by a stunning 71% between 1958 and 2012, according to the United States’ 2014 National Climate Assessment (still available online and not yet purged as of Tuesday, May 9).

Meanwhile, evacuated Montreal-area residents who began returning to soaked homes face ongoing inconvenience and stress. “We’re going to be literally weeks with [water] levels that are above normal. Probably it’s going to be a week to 10 days until we get down even to what would be considered a high spring level,” said Michael Sarich, a water engineer with the Ottawa River Regulation Secretariat.