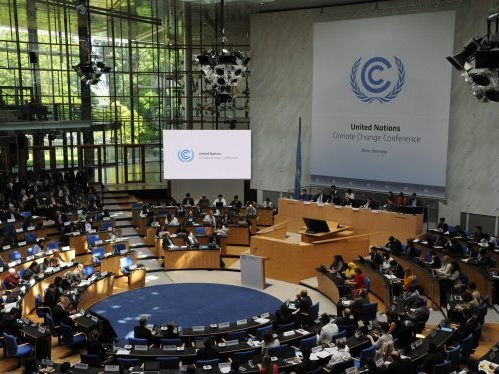 On the eve of mid-year climate negotiations in Bonn, Germany, the Trump administration has issued a blunt response to a peer review process for developed countries participating in the Paris agreement, aimed at assessing their progress toward meeting their goals under the landmark global deal.

The “multilateral assessment” process is set up to “promote the comparability of efforts among all developed country Parties with regard to their quantified, economy-wide emission limitation and reduction targets,” the UN Framework Convention on Climate Change stated in the lead-up to the Bonn meetings that began this morning and run through May 18. The question-and-answer process was to be the first of three steps following the completion of technical reports on each of the countries’ greenhouse gas reduction initiatives.

While all the national responses are available on the UNFCCC website, the terse responses from the U.S. received the initial media coverage. “The administration is reviewing existing policies and regulations in the context of a focus on strengthening U.S. economic growth and promoting jobs for American workers and will not support policies or regulations that have adverse effects on energy independence and U.S. competitiveness,” it repeated three times, Bloomberg reports, “including in response to China’s question about how it could possibly meet its carbon-cutting commitment while undoing Obama-era climate regulations.”

The U.S. responses “left little doubt that it is taking a different approach in tone and substance from former President Barack Obama,” the news agency adds. “They suggested little interest in participating in the assessment process so member countries can keep an eye on each others’ progress. The process, designed to ensure transparency, also empowers big greenhouse gas emitters—such as China, the world’s leader—to scrutinize other countries’ efforts and highlight any lapses.”

Alden Meyer, policy director at the Union of Concerned Scientists, questioned whether Trump had considered the economic impact of withdrawing from the Paris agreement, as several senior advisors in his administration have advocated. “Dismantling the climate action plan will actually harm U.S. competitiveness, impede its ability to compete in clean energy markets, and reduce job creation,” he told Bloomberg.

“Taking the U.S. at its word about its concern for U.S. jobs and energy independence suggests the U.S. should double down on climate action, not backtrack,” agreed U.S. Environmental Defense Fund climate specialist Alex Hanafi. “Businesses large and small support U.S. climate leadership because they know investing in clean energy technologies means American jobs and innovation at home, and better access and competitiveness for their products abroad.”