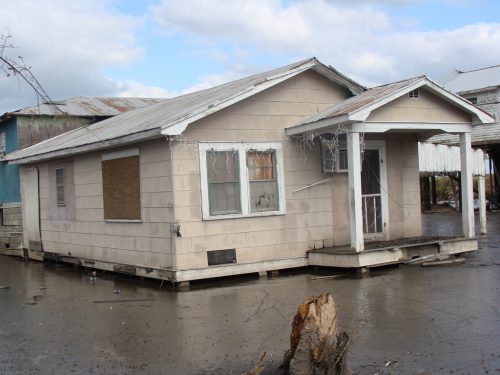 Seventeen U.S. communities, the majority of them Indigenous, are already being forced to give up their current, culturally and economically significant locations due sea level rise, Think Progress and the New Orleans Times-Picayune report, based on a new analysis by the Center for Progressive Reform.

“Community displacements due to climate change are about so much more than moving possessions and finding new homes,” said report co-author Maxine Burkett. “They uproot entire communities and tear at the fabric of life, while threatening cohesiveness and culture, as well as doing harm to individuals, families, and businesses.”

The report said federal and state governments in the U.S. could make a wrenching, life-changing process a bit easier by creating opportunities for relocatees to buy or obtain land in less vulnerable areas, Think Progress notes. The Department of Housing and Urban Development pointed in that direction last year with a US$48-million grant to Isle de Saint Charles, a Louisiana community facing stronger storm surges and rising seas, to move 60 residents to higher, more stable ground.

But “the relocation opportunities presented by the federal government to both native and non-native communities are inadequate,” the report stated. “Federal policies and programs for relocation need to be adapted to better serve the many and growing number of communities facing dire threat and actual harm from climate change.”

The Center for Progressive Reform “also suggests that communities could try to generate their own revenue to purchase new land through some kind of industry, like selling timber on their existing land or extracting valuable minerals,” writes Think Progress correspondent Natasha Geiling. “That option also comes with caveats, however, because sometimes resource extraction merely exacerbates environmental degradation that, in turn, hastens erosion of the tribe’s land.”

Verchick also cast the study as a “wake-up call to political leaders who scoff at climate change and the prospect of it affecting more Americans,” the Times-Picayune notes. “We are talking about a future where tens of thousands of people are going to be relocating, and yet we have no uniform strategy. And that’s a conversation we’re almost not having at all in the Unites States right now.”

Think Progress points to the authors’ conclusion that “the federal government needs to provide adequately-funded and procedurally appropriate opportunities to acquire and manage land for relocation.” They added that “federal agencies have the resources and expertise to match the extent and urgency of the threats to vulnerable communities.”

But with 50 to 200 million people on track to be displaced by climate change by 2050, that finding “appears at odds with the current trajectory of U.S. climate policy,” Geiling notes. “The Trump administration has shown interest in cutting funds to nearly ever climate-related program across the federal government, and is considering pulling out of the Paris climate agreement as early as next week.”

Montreal Declares Emergency as Floods Sweep Much of Canada